I’m not really an album guy. Particularly now in our ‘download-any-song-you-want-era’. I grew up on compilation albums and AM radio. It was all singles, singles singles: a new sound every three minutes. A whole album is just a vinyl horizon for my needle dropping. But I have to say this year I got hooked on more than a few long players. What grabbed me? I could say it was the songwriting, a coherent sonic palette, the performative ingenuity, etc. But hey, who am I kidding? It was mostly the hooks. Fair warning: there is considerable overlap of artists here with my should-be hit singles list (duh) but not entirely. Bottom line: you won’t go wrong putting your cash down on these LPs in toto.

Edging out Daisy House’s fantastic Bon Voyage by a hair, my number one album for 2018 is Aaron Lee Tasjan’s Karma for Cheap. The more I listened to this record, the more I loved the songs and the performances. There is something extraordinary in just how Tasjan combines his elements. He’s got rumbly guitar, he’s got jangly guitar. His vocals run the gamut from Tom Petty-solid to Roy Orbison-aching tenderness. There’s not a weak cut here, but pay special attention to subtle hooky vocal interplay on “Heart Slows Down,” or the driving guitar hook behind “End of the Day,” or the touching “Dream Dreamer.” You won’t steer wrong with his back catalogue either, particularly 2016’s Silver Tears! There is so much I could say about all 20 albums but frankly the music speaks for itself. Click the links to go directly to the band’s bandcamp, Facebook or webpages. 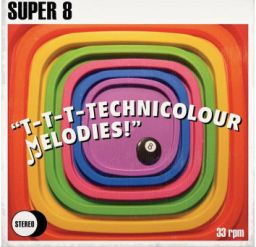 One final word: I had to single out Super 8’s stupendous triple album accomplishment this year for special attention. After a two-decade career in rock and roll that can only be described as cinematic in its litany of seeming breakthroughs, bad luck, record company shenanigans and some bandmate’s bad faith, these albums are a vindication of his resolve to stick with music. Each record is finely crafted portrait of late 1960s summertime sunshine poprock. Your time machine back to 1968 is ready for boarding! Just hit play.

Let’s make 2019 another great year for poprock – buy these albums, get out to some concerts, and tell your friends about these great finds.

2018 was a freakin’ fantastic year for poprock! How do I know? Every year-end I put together a playlist of tunes released that year. In 2016 it consisted of 58 songs clocking in at just over 3 hours. By 2017 that list expanded to 98 songs running over 5 hours. This year the list exploded to 175 songs going on for over 9 hours! My list of should-be hit singles had to expand to a top 50 just to accommodate all this talent. Hit the links below to find each artist as featured in my original blog post this past year or to go to their bandcamp or Facebook page if I didn’t write them up.

So, without further ado, here is Poprock Record’s should-be hit singles for 2018:

For the second year running Daisy House tops my list of should-be hit singles. I have simply run out of superlatives to describe the musical genius of this band. Great songwriting, a killer 1960s vibe, flawless production and performance – it just doesn’t get any better than this. Do yourself a favour and head over to Bandcamp to download their whole catalogue. Oberon Rose came a close second with what must be one of the coolest singles rolled out this year. Ruler ruled my playlist for a good part of 2018, with “Unhindered Place” just one of the great songs on his album. I love the way William Duke’s guitar sounds like a jangle waterfall on his hooky masterpiece “Carole and Silver Screen.” And Aaron Lee Tasjan is a real find – so many possible selections – but more on that with my upcoming ‘20 must-have LPs for 2018’ post. I could go on … (but click on the links to get the full story).

I hope you enjoy these fifty songs enough to click on over to some of the artists’ web real estate and help them along career-wise. 2019 promises to be another hungry year for many of these mostly struggling artists – so do your part: buy their music and go see them live when they come to your town.

What awaits us in 2019? Well, if 2018 is anything to go by it’s gonna be a year full jangly guitars, blissed out harmony vocals, rocking rhythm sections, and hooks, hooks, hooks. Fads change but these essential elements combined together will always have an audience – thank goodness! On to the business at hand: I love timely themes so today is all about new year’s – in song, of course.

Matt Pryor gets us into the right frame of mind with “Totally New Year” from his 2008 album Confidence Man. Basic message? Take up the new in the new year and move on from the ‘bones the closet may hold.’ That’s not far off Ryann Allen’s sentiment on “New Year’s Day” where everybody deserves the chance at renewal that ‘new’ promises. ‘Don’t let another year slip away …’ indeed. Taking up the tempo a bit Summer Magic offer us a shimmering “New Year’s Day Surprise” via their unique brand of mellow psychedelic pop. Shifting into full on wistful, Rob Clarke and the Wooltones channel the Beach Boys from their fab holiday EP Bring Me the Wooltones This Year! with “New Year New Day.” Stepping on the queercore pedal to wrap this up, a great tune from the super Pansy Division comeback album, Quite Contrary, “Kiss Me at Midnight (New Year’s Eve).”

I hope one of your new year’s resolutions is to increase your support for all this great music. Hop on over to Matt Pryor, Ryan Allen and his Extra Arms, Summer Magic, Rob Clarke and the Wooltones, and Pansy Division with your e-wallet and get this year started right!

Flip For It, Modern Space, Sharks and Other Dangers, Summer Magic

The research and development side of this operation is skint. There’s just too much music to explore and not enough time to check all the possible sources of great new music. So sometimes I cheat. When I really want some quality I head over to Don Valentine’s I Don’t Hear a Single to catch up on what he’s found. Don’s plugged into some secret power pop society that funnels him only the finest jangle-inflected, melody-drenched rock and roll. Seriously, aside from the occasional foray into his prog-influenced youth, Don seldom lets me down. Like these two exhibits: Summer Magic and Modern Space – great albums full of should be hit singles.

Summer Magic’s Sharks and Other Dangers combines a late 1970s new wave sensibility with a contemporary power pop sound that could easily be filed next to recent releases like Ruler’s Winning Star Champion or Caddy’s Ten Times Four. It’s all captured on the opening track and obvious single, “Hey.” But the whole record is worth getting to know. Check out the killer B52’s guitar rumble undergirding “Tracing a Bird on Construction Paper,” or the very Beatles Revolver vibe of “Charles de Gaulle,” or the late 1960s sunshine pop sound of “Attraction Corridors,” or the new wave-meets-Beach Boys aura of “A Certain Little Chord.” Another candidate for single would be the hook-riddled “By Your Side,” which somehow manages to make the distinctive sax bleat of the 1980s sound cool again.

Meanwhile right in my own Canadian backyard can be found the stupendous Modern Space who manage to blend melodic guitar rock and roll with an addictive dance groove. Reviewers have drawn comparisons with The Vaccines and I would agree but add Vancouver’s Zolas as well as Portugal the Man, particularly on the toe-tapping single “Flip For It” and the relentlessly hooky “Do or Dare.” And then there is the melodic standout, “Ship is Sinking,” a hip-swaying, arm-waving, crowd sing-along, for sure. And for a more traditional rock and roll approach click on “Come and Get It.” Be forewarned, Flip For It is a Saturday night dance party album.Do Or DareShip is Sinking

Don and I would love to see these two act explode into super stardom. Why not help us out? Visit Summer Magic and Modern Space online right now and do your part.