It’s end-of-the-year ‘best of’ list time and we here at Poprock Record wish to join the almost evangelical rush to judgment that accompanies such proceedings, though with a twist.   I mean, who am I to say whose records are the best?  If I put them up on the blog then you already know I think they are pretty great and worthy of Beatlesque adulation.  Still, I do feel like shining an extra light on a few songs that just screamed ‘hit single’ to my 1970s AM radio-trained ears.  So instead of a ‘top ten’ list I’ve assembled a list of twelve ‘missing’ hit singles, songs that would easily top the charts in my alternate poprock universe.

Pulling together my twelve apostles of poprock was not an easy task.  From the full list of songs featured on the blog in 2016 I singled out the ones actually released in this past calendar year – 59 songs in all!  Then reducing that number down to just twelve was painful as there were compelling arguments for keeping any and all of the other 47 as well.  But, in the end, cuts were made until just twelve remained.  They appear in no particular order and the hotlinks take you to the original posts as they appeared on the blog.  These are a dynamite twelve pack, sure proof that melodic rock and roll is far from dead, if somewhat remote from the more conventional charts.

David Brookings and the Average Lookings, “Time to Go”

Chris Staples, “Hepburn in the Summertime”

The Rifles, “Wall Around Your Heart”

Purses, “Wheels on the Run”

Check out these bands in more detail on their various webpages.  You find all the links on the original posts. 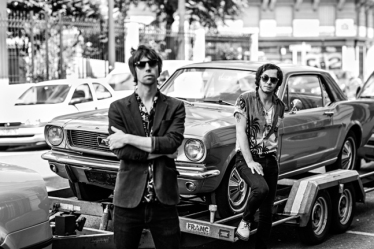 All popular music is synthesis, really. Everyone is influenced and the best somehow take their influences and combust them into something that sounds very different from where they started – so different that people mistake it for something totally new.  Bosco Rogers is that perfect distillation of influences that breaks out into a new sound.  It would be easy to pick out the various familiar musical motifs from the 1950s through to the 1980s on their debut album Post Exotic – the fifties Chuck Berry swinging guitar lines, the psychedelic meets glam meets garage rhythm section, the great textured vocal effects – but that wouldn’t do it justice.  These guys are masters of the produced sound: each element of any song is placed into the mix ‘just so’ for maximum impact and effect. Is it surprising that the band’s two members run their own separate recording studios in the south of England and France?  Not really.

Yet this would be of fleeting effect if the material itself was not strong.  And it is.  It is hard to pick out just a few highlights from this album as each song contains its own special bit of ear candy, some great original sound, a distinctive instrumental choice, a hook that won’t let go.  If pressed, I’d have to steer listeners to the super folk blues sound of “Anvers” with its catchy psych pop middle section, or the hypnotic whistle motif of “The Middle.” Then again title track “Post Exotic” has a seductive guitar swing, “Beach! Beach! Beach!” is an alternative universe beach party staple, “Drinking for Two” recreates the sunshine pop sound using classic 1960s vocal arrangements, “Roses” oozes 1980s synth pop, and so on.  In a world of individual song downloads, Post Exotic rewards the listener with the complete album experience: all player, no filler.

One can only hope that Bosco Rogers will be touring in support of this amazing first album soon.  Keep up with their tour and music news on the their Facebook page.