Emperor Penguin, Soak Up the Gravy, Some Kind of Lucky, The Hangabouts, The Jellybricks 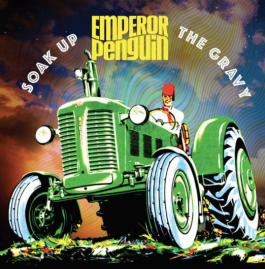 First up, a brand new 2020 album from London’s Emperor Penguin. Just one look at the cover says we’re in for fun! Soak Up the Gravy hits all the indie poprock marks from decades past. From the wily XTC-like veneer of “Go Guitargonauts!”to the poppy Dylan elements in “You’ll Be the Death of Me” to the mid-period Squeeze waft of “Memoria Magdalena” to the Sgt. Pepper vibe animating “Burning Man.” Other songs like “What’s Come Over Me” and “Public Information” simply burst with delightful melodies. “Speedwell Blue,” the duet with the fabulous Lisa Mychols, is well, just, gravy! Definitely a full album experience.

Every year I overlook some masterpiece or two, like The Jellybricks’ 2019 release, Some Kind of Lucky. The band has that classic rock and roll combo sound, two guitars, bass, and drums, working over material with solid hooks. Sometimes the guitar drone and vocal harmonies remind me of Rooney or The Odds, particularly on tracks like “Faith” and “D.O.A.” Presently I’m hitting repeat pretty hard on the obvious should-be hit singles, “Brooklyn” and “Can’t Get Over You.” I love the call and response between the main and background vocals on the latter track! Also, don’t miss out on the band’s winning mellow moments with the title track that rounds out the album.

Detroit’s The Hangabouts have a new single out: “Who Wants Cilla.” It’s great but personally I’m more tuned into the B-side, “Mrs. Green” which exudes a Beatles for Sale or early Monkees vibe. From past releases, particularly 2017’s Kits and Cats and Saxon Wives, we know that band is reliably poprocky so this single bodes well for a whole new album hopefully sometime soon.

Readers, you know that drill. Check out Emperor Penguin, The Jellybricks and The Hangabouts at these hot-linked internet locations!

1 thought on “Around the dial: Emperor Penguin, The Jellybricks and The Hangabouts”