Batteries Not Included, BNI, Hey Hey Hey, ON, Once in a World, The Overtures, Travel Lanes, Youn Guv

Melody central stands at the junction of pop and rock, with hooky guitar lines and heavenly background vocals to spare. It’s one stop shopping for your melody-coated rock and roll needs. Today’s melody-ers hit the beat with just the right balance between old time inspiration and a contemporary indie elan.

Bandcamp has this ‘if you liked’ feature that runs across the bottom of the page of any artist you might be checking out. I find so many great acts there! Like Chicago’s Batteries Not Included. Just looking at their website live show pics, these guys seem like the ultimate party band to me. Rockin’ together since 1980, sporadically releasing an LP and EP, BNI boast opening for a wide range of classic sixties bands (e.g. Spencer Davis, Lovin’ Spoonful) and more recent indie poprock outfits (e.g. The Smithereens) over the years. Still, while remaining active, they’ve never really broken out big. A quick spin through their latest long player, Hey Hey Hey, is proof their stick-to-it-ness is not misplaced. What fun, happy tunes! “Winning Ticket” shimmers with early Romantics hookyness. “Count on Me” is so early 1960s Buddy Holly meets Bobby Fuller. And then there’s tracks like “Fall for You,” “Bit by Bit,” and “I Knew” which vibe the fresh, crisp melodic rock and roll sound of the Paul Collins’ Beat. This is a no-risk purchase if you’re looking for a hooky no-nonsense poprock record.

Toronto-cum-Brooklyn’s Young Guv has a double album that practically lunges out of the speakers with its raucus, jangly opening cut, “Patterns Prevail,” vibing Teenage Fanclub on speed. Perhaps that’s not surprising as Young Guv’s main man is Ben Cook, sometime leader of punk bands Fucked Up and No Warning. Well, he has taken a turn down the melody mile on this latest release as things start out hooky and just don’t let up from there. “Roll with Me” sounds very uptempo Elliott Smith. Then “Every Flower You Meet” gets a solid Matthew Sweet groove on. “Luv Always” steps on the jangle pedal hard. And so on. Personally, I love the hooky lead guitar line anchoring “Exceptionally Ordinary” – very Primitives – and the Jayhawks aura lingering over “She’s a Fantasy.” The second half of the album turns down the amps and goes a bit pop-soul but remains divine. Guv I & II is available bundled together or sold separately. Is there anything Young Guv’s Ben Cook can’t do? 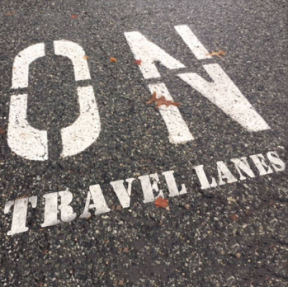 I can hear all sorts of classic influences on Travel Lanes’ new record ON: Tom Petty, the Replacements, a bit of Elvis Costello and, of course, the Beatles. Indeed, you can hear all those elements permeate the kick off track, “True and Tried.” Then things turn in a slightly different direction with the country, pub rock feel of “Answer My Prayers” and the dynamite pedal steel on “It’s Time.” It’s funny, while Frank Brown writes and sings the songs, there is a strong ‘band’ sound to this record. Songs like “Routine,” “Big Heart,” and “Lover’s Lane” are played with the ease and comfort of a Rockpile-esque sense of boozy togetherness. This is group that really knows how to play and they play together so well. ON is an album listener’s treasure: you’re gonna listen to it again and again. 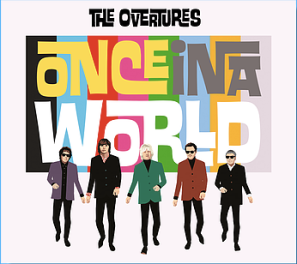 The Overtures bill themselves as the ‘UK’s finest 60’s tribute act’ and the fact they’ve been hired by the likes Paul  McCartney and Elton John kinda backs up their bona fides. But with their new album Once in a World they cast aside the ‘merely a cover band’ label to offer up a raft of original tunes – and the result is brilliant, and not just in the jangle sense of that term (though, yes, it is that too). Frankly, with this band’s back story and image, I was worried that taking a crack at more original material might just produce something that was too derivative. And, hey, the British invasion and Beatles influences are all over this record, for sure. But this album is a winner, chock full of simply great tunes performed by a band with killer chops. Exhibit A: album opener “Till Your Luck Runs Out” has guitar sounds that are very Searchers but in their comeback 1980 new wave guise. Then the obvious should-be hit single arrives with “Once in a World” and it’s a timeless slice of poprock. Seriously, it could 1980s Squeeze (if they’d picked up an electric 12 string!) or it could be any number of great melodic rock tracks released just this last year. Other songs harken back to the 1960s and 1970s: “The Hollow Bells” sounds very Hollies-Bryds-Turtles, “She Belongs to Yesterday” has a lovely, hooky British invasion lead guitar line, “Red Dolls House” could be a great lost Elvis Costello tune, “Find Out What You Mean to Me” is a Cavern-era Beatles workout – I could go on. Really, there are so many highlights on this album, you’re going to want the whole thing. My personal fave is “She Shines a Light” with its seductive lilting hooks. You can pick up a physical copy of the album from the good people at Kool Kat Music!

Till Your Luck Runs OutShe Shines a Light

A trip to melody central saves you the bother of searching all these hooks on your own time. That’s why you should pay it forward and hit the links to get closer to the merch available from Batteries Not Included, Young Guv, Travel Lanes, and The Overtures now