Given the everyday horror of the past few years – war, pandemic, the political right – it’s getting hard for a humble, candy-fueled monster holiday to compete. Luckily we still have the music. This post celebrates fright night with a set list of seasonally appropriate tunes covering a good range of monster diversity.

Justin Roberts gets called a kids songster but I think his tunes are for everyone who’s not quite finished growing up. He’s fun and whimsical and not afraid to be silly. And his songs will get stuck in your head like that gum on the underside of your chair at assembly. His “Trick or Treat” captures all the action of the nighttime candy run from a kid’s point of view and thus is an appropriate opening to our proceedings. The Freddie Steady 5 also strike just the right seasonal mood with their spirited cover of P.F. Sloan’s “Halloween Mary.” They take the tune out its original folk rock register to deliver a more pub rock easy-going party feel. Let the party begin!

Alright kids, we know you’re mostly here for the candy but deep down you’re also up for a bit of fright. Time to bring in the monsters. Don’t worry, we’ll ease you in with the pleasant Byrdsian psychedelic  vibes of Pseudonym on “Before the Monsters Came.” Then the elusive and mysterious Clovis Roblaine sounds like he’s cooped up in his castle on a hill at the start of his “Monster Love.” But as he gets going we’re transported to what sounds like a 1970s riff on all those old cartoony drive-in movie monster encounters. Like Rocky Horror but without all the cross-dressing. Then there’s Timmy Sean’s “She’s a Monster” from his poprock musical A Tale From the Other Side where the creature sounds very 50 foot women-ish put through a serious ELO soundtrack filter. So far the monsters are pretty low on terror but come with popcorn.

One band reliably up for a holiday musical tribute is Vista Blue. “Boy Beast” is the flip side to their Halloween single release “Victor Crowley” and I liked this b-side just a bit more for its imagery and pulsing energy. The band also appear on Radiant Radish’s timely, pumpkin-approved collection Time of the Season. The whole album is great, it’s free, and it also includes a band called The John Carpenter’s The Things doing a mad rush of a song called “Here’s The Thing.” It’s poppy and punky with some great early 1980s synth background runs holding everything together. Aimee Mann’s “Frankenstein” is obviously on point for our theme. Do I really need much of an excuse to include anything by Mann? No. But listen to the sophisticated lyrics here amid a layering in of so many interesting musical adornments. Talent bleeds out of this gal like an open wound. Indie darlings Kiwi Jr. serve up some “Wicked Witches” because it can’t be All Hallow’s Eve without some serious sorcery.

Now if we really want to move into more scary territory we’ve got to get to the zombie and vampire portion of our programming. Modern horror definitely leans on these two players to up the terror quotient. Sal Baglio uses his band The Amplifier Heads to bring The Band back from the dead with his spot-on Band-like reincarnation of their sound on “Zombie Moon.” Warning, things get a bit hairy near the end (as they should). During a zombie apocalypse it’s all too easy to forget your partner’s many co-dependent observations about your shortcomings. Luckily we have B.A. Johnston to keep us focused with “You Will Miss Me When the Zombies Come.” Not that you’ll remember. Ok, on to vampires with The Orion Experience’s disco poprock vamp of a tune “Vampire.” The ‘ooh ooh’s so remind of those creepy Tommy Lee Jones photo shoot scenes from The Eyes of Laura Mars. Tired of those impersonal representations of vampires? Italy’s Bee Bee Sea give them some personality on the rollicking “Vampire George.” I love the Together Pangea vibe on this performance, combining swing with hooks and just a touch of punky swagger.

Our last stop on the fright night scare tour is ghost city, just so the mood will linger. Copenhagen’s Surf School Dropouts are such a curious outfit. Are beaches in Denmark much like California? Because they’ve got the California beach sound down. And just how hard is surf school anyway? Whatever. “Attack of the Ghost Hot Rods!” takes us back into the fun zone of this holiday with goofy lyrics, sound effects, and killer guitar licks. By contrast, Look Park’s “I’m Going to Haunt This Place” is more mellow, a bit maudlin. Haunting really.

Well kids I hope the candy was worth it. Because soon the frights won’t end when the monsters take off the mask. They’ll just be starting.

Sometimes smart guys skip grad school and make records instead. It seldom leads to tenure, of any kind, but can you put a price on piece of mind? Well, if they’d become academics you probably could – but that misses the point. Which is that I selfishly appreciate that these bright tuneful dudes forwent cushy jobs to provide me with all this great music. Thanks guys! Seriously though, when you combine smart, multi-layered lyrics with catchy hooks, you’ve got something pretty special. Our quartet of smart guy poprockers do that and more! 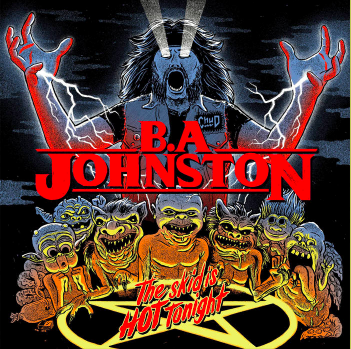 Warning: there’s some serious Canadian content in this post. Though not too serious, if Hamilton’s B.A. Johnston is anything to go by. With album titles like Stairway to Hamilton, Shit Sucks, and The Skid is Hot Tonight you can pretty much see where this is going. Punville. Even Johnston’s name is a joke – derived from a teen nickname where Christian Johnston became ‘Bored Again’ Christian, or B.A. for short. Johnston’s work is so Canadian working class but his protagonists are not Springteen-esque heroes, they’re just ordinary folks. And despite the humour, Johnston shows a twisted kind of respect for this subjects. Stylistically, the music exudes Canadian icon Stompin’ Tom on acid, with some Jonathan Richman earnest sincerity, and a bit of Ben Vaughn goof. Here I’m just going to focus on his poppier numbers. Like “I Miss that 90’s Hash” or “I Need Donair Sauce” – both tunes have subtle hooks and a bit more polish that Johnston’s usual fare. “Orangeville” channels a lumpen Johnny Cash while “Straight Outta Cobden” is B.A.-typical low-key, with hooky backup vocals in the chorus. “I Love It When You Dress Up” has a sweet ambling country tempo and a refreshing lack of humour. “Fort McMurray” captures the narrowed class horizons for most working people. “Couch Potato” is like B.A.’s philosophy crammed into 90 seconds. With 13 albums since 2000, there’s a lot more B.A. to discover and he’s worth the slide by. 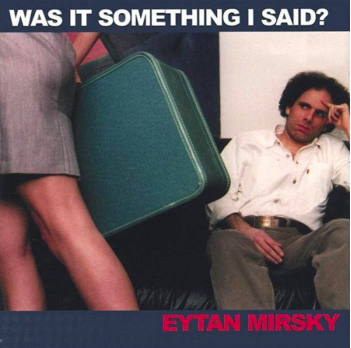 Hapless is the word to describe Eytan Mirsky’s public musical persona. But awkward and desperate would run a close second and third. Yet far from being a downer, Mirsky constantly lightens the mood with a dry wit and dark cynicism worthy of Nick Lowe or Elvis Costello. Over the course of seven albums his rock and roll has been consistently tuneful, full of sly hooks and loads of clever verbal innuendo. The basic raw material is all there in the 1996 debut album title, Songs About Girls (and Other Painful Subjects), particularly on cuts like “Smart Enough” and “Beautiful Inside.” Or check out the Joe Jackson-esque swing of “What Do I Do?” and “Either Way” from 1999’s Get Ready for Eytan! Then there’s his 2001 masterpiece, the hilarious Was It Something I Said?, an album of wall to wall killer cuts. I’ll just draw your attention to “Can I Get Any Lower?” and the very hooky “Sluts.” But hey, drop the needle anywhere on this record and you come up with something great. I could keep going like this through every album. Instead I just want to highlight Mirsky’s great use of pop culture references and humour on tracks like “Watching Dawson’s Creek” (from 2016’s Funny Money), “Share If You Agree” and “Lingerie Pillow Fight” (both from the fantastic new 2019 LP If Not Now … Later.” Honourable mention: don’t miss the Paul Collins-esque “She’s Looking Better” from 2004’s Everyone’s Having Fun Tonight! Mirsky also does a lot of Facebook posts covering just about every song every written. And believe me, when your song gets the Mirsky treatment it’s been sung. 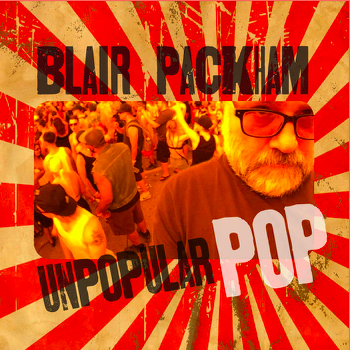 I got to check out Blair Packham when he opened for the Northern Pikes recently in Toronto. Who’s Blair Packham? I didn’t know. But after loving his clever, hilarious and hooky blue-eyed soul performance I went looking. Turns out he had a some Canadian hit singles (like “Last of the Red Hot Fools”) with his 1980s band, The Jitters. Since their breakup in 1991, he’s released only three solo albums. But what great LPs they are! Packham offers up hooky poprock numbers with intelligent wordplay and heartfelt ballads, delivered by a pop-soul voice that falls somewhere into the sweet spot between Huey Lewis and Paul Carrack. Cases in point “Weird to You” and the title track from 2000’s Everything That’s Good. If the band sound familiar on Packham’s 2004 release, Could’ve Been King, they should – it’s Canada woefully underappreciated poprock geniuses The Odds. They provide some topnotch playing for Packham’s killer tunes like “Come Undone,” Somebody Else” and the touching “Little Fish.” I love the lyrics on “Could’ve Been King” – ‘didn’t like the hours, the wretched excess, the abuse of power …’ But Packham really hits it out of the park with “One Hit Wonder,” which is simultaneously one of the most honest renderings of the liabilities of being a one-hit-wonder while still incredibly respectful to the artist that has it. And the song has an infectious handclapping, singalong chorus! The record ends with “Last,” a song that’s all about, well, being last. Thirteen years later Packham returned with 2017’s Unpopular Pop and it was worth the wait for the hooky, single-ish “You (Yeah, You)” and the Costello-vibing “Other Side.” 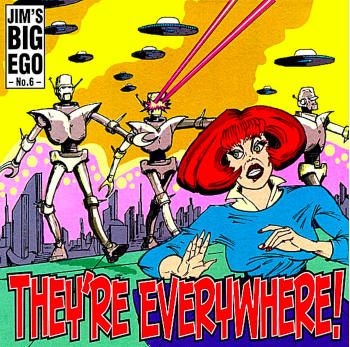 What a wonderfully twisted world is the land of Jim’s Big Ego! It’s a place where anything can be the subject of intelligent satire, from mixed tapes to loving zombies to math prof rock stars to impoverished gun owners. But unlike some sardonic songsters, Jim’s got a clear political position very much on the progressive side of things. It’s there clear and without irony on the wonderful “International” from 2008’s Free*. And that’s just another thing to like about JBE. Amidst all the fun and cleverness, there’s a point to the poking. I came to the band via their quasi-hit single, “The Ballad of Barry Allen,” a slick piece of melodic goodness from their 2003 release They’re Everywhere. I expected to find more but instead I found a guy (Jim Infantino) with a great range in songwriting and performance, sometimes bringing to mind a more poprock Robbie Fulks, or Kevin Devine vocally on occasion, or Peter Case in stretching from new wave to country to folky material. You can dig in anywhere and find something to enjoy, like “Concrete” from 1999’s Noplace Like Nowhere. Or you can check out his last LP, 2012’s Stay, a smart, funny commentary on cults, religion, zombie love, and money in politics (my faves here? The hooky “Chills” and “Earworm”). The catalogue must-listen is “Award Show” (on Free*) a spot on dismantling of the internalized self-hatred and self-indulgence of the genre. Sadly, there’s been no new JBE product for over a half decade. Let this entry act as a placard-waving demand for more JBE. JBE! JBE! Now, cue the water cannon …

You don’t have be smart to make great music but it’s certainly a value-added feature, for people who like that sort of thing. If that’s you (or someone you know), visit B.A. Johnston, Eytan Mirsky, Blair Packham, and Jim’s Big Ego and let the appreciation flow (out of your wallet). After all, they could have been scientists.