Gregory Pepper and his Problems, Under a Heather Moon

When last we left our hero he had just released a smash new album, I Know Why You Cry, to critical blogger acclaim and, no doubt, impending worldwide domination. But before he could launch a tour that surely would have left audiences swooning and American late night talk shows clamouring for appearances, COVID 19 hit. Unperturbed, work at his Camp Pepper headquarters continued, preparing the release of The Complete “Dad Year” Recordings (2017-2018) and now a new treat, Under a Heather Moon. I’ve gotten to the point where I count down the days to a new Pepper release, a ritual previously reserved for the likes of Marshall Crenshaw, Nick Lowe, Fountains of Wayne and early 1980s Paul McCartney. Under a Heather Moon does not disappoint. It is a delightful slice of everything that is magical about Gregory Pepper: clever wordplay, subtle melodies, with just a touch of sardonic social commentary. But don’t blink – you might miss this record. The album’s seven tunes collectively barely clock in at five and a half minutes! The bandcamp edition includes three bonus tunes that stretch things out to almost a quarter hour. But hey, I’m not complaining. Short they may be but the tracks are undeniably little gems. 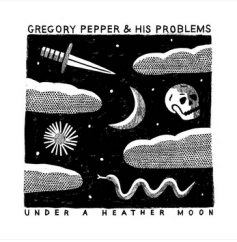 Pepper has a McCartney-esque facility with different musical styles, ranging from music hall (“Smile”) to musicals (“Mayor’s Tomb”) to heel-clicking danceable poprock (“Do Sports”). “Whoa Dude, Whoa” has a deliciously ominous vibe, like the soundtrack to mid-1960s secret agent movie. Then he gets his wist on with lovely piano pieces like “(Isolation)” and “Finite Thing” (though the latter has a nice blow up half way through). “Recluse Abandon” really showcases Pepper as a master melodian, squeezing hooks into the tightest song spaces. The bonus tracks allow things to stretch out a bit. Particularly noteworthy is an extensively reworked version of “Funny, Eh” (originally from the Dad Year recordings), this time a little less manic and bit more ornate (in a good way).

Why not enjoy a (brief) respite from whatever you’re avoiding or stressing over right now with this new mini-album from Gregory Pepper and his Problems? And don’t forget, it’s available in extended form on bandcamp. It’s delightful. It’s even delovely.