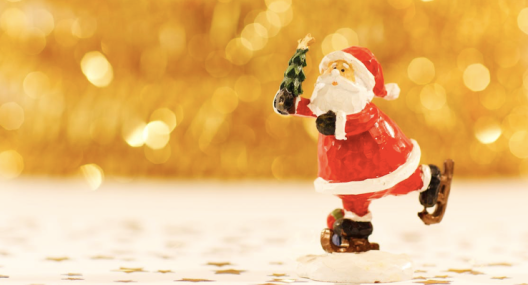 It’s been blasting in your ears for last two months I know: festive music! Typically the same 20 songs or so. But I refuse to Grinch out on holiday music simply because we’ve become tired of the classics and not-so-classic that dominate the airwaves and the shops. So as my [insert appropriate holiday commitment here] present to you, dear reader, I’ve scoured the poprock-o-sphere for some fresh holiday tune-age. And I’m happy to report there’s still a whole lot of great stuff to choose from! 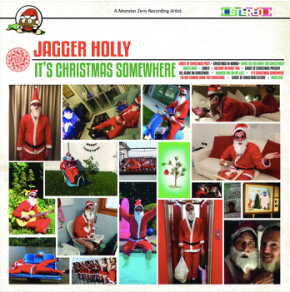 Let’s start with a brand new blast of melodic punky goodness from Jagger Holly. “Mistletoe” appears on the band’s just released seasonal LP It’s Christmas Somewhere. Overall, the record is defined by a Ramones-esque approach to crunchy speed rock and roll where the band takes on classics like “Santa Baby” while also offering up a host of original tunes. I chose “Mistletoe” because it slows the generally frenetic tempo a bit and showcases the band’s impressive stylistic range, tapping a more indie 1980s melodic rock vibe. With their album #1 The Brothers Steve already gave us a pretty spectacular present this year. But was that enough? No. So in time for the holidays they’ve cooked up a double-sided holiday single entitled Christmas Magic (even though neither song has that title!). Personally, I love “Listen Up! It’s Christmastime” with its oh so subtle ear wormy chorus and warm cocoon of background vocals enveloping the whole track. It’s got the sound of a classic poprock holiday tune to me! The Austria-cum-Liverpool MonaLisa Twins initially made their name as a YouTube cover tune sensation, though recently they’ve released albums of original material too. And they’re actually twins. Their records have an amazing vibe! Rootsy with Merseybeat accents and those spine-tingling blood harmonies. Their plainly-named seasonal record is Christmas, and it contains all the usual tunes with a key exception: “Walking in the Air.” The song is known to Brits from appearing in the Howard Blake-scored animated film of Raymond Briggs’ children’s book The Snowman. Child soprano Aled Jones’ version is a bit choiry for my tastes. The MonaLisa Twins transform the song into a rootsy, indie classic! I would have loved to hear the Everly Brothers cover this.

The Brothers Steve – Listen Up! It’s Christmas TimeMonaLisa Twins – Walking in the Air 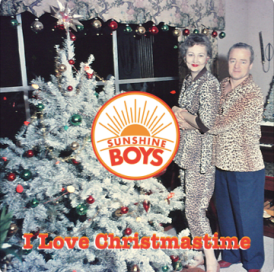 Despite the un-Christmas-y climate, Los Angeles native Todd Herfindal gets right into the spirit, ramping up the jangle on a trio of jingle tunes with a maxi-single entitled Christmas Star. The title track sparkles guitar-wise with heartfelt vocals in the verses giving way to some shimmering harmonies in the chorus. Hard to choose between this one and the Fountains of Wayne swing of “Santa’s Got Something for You” as my fave.  So why choose? Consider it a ‘double A-sided single’ with something extra. Chicago’s Sunshine Boys step on the stereotypical Christmas bells pretty hard as this song opens but what follows is an amazing tune, an instant sing-a-long. “I Love Christmastime” is a bit poignant, a smile-inducer for sure, with candy cane jangle lead guitar lines and a cool subtle organ layering in the background. Another instant classic, IMHO. Norwegians American Suitcase offer up tune that sounds like a country-era Byrds holiday moment with “Christmas Blues #2”: a catchy lead guitar line lures you in to a sweet tune, cloaked in holiday harmonies and hooks. A pleasing addition to any holiday mix.

Now for something a bit different, Sofa City Sweetheart’s “O Come, O Come, Emmanuel” from their holiday EP Christmas on the Sofa. While I’m not one for traditional carols as my go-to holiday songs typically, what works here is how the stark simplicity of the piano and vocals resonate in a truly beautiful and touching performance. The EP is full of other highlights as well, like the engaging instrumental “Boogie Woogie Midnight.” LA’s Army Navy also got into the holiday music game with “Stay In,” a lushly acoustic-driven poprock treat, with clever lyrics and a nice vocal counterpoint to lead singer Justin Kennedy with The Like’s Charlotte Froom. The tempo is very cozy-by-the fire hipster, in a good way. My last recommendation is a bit of a cheat – I usually limit myself to nine suggestions but the ninth this time is actually an album! But Kool Kat Kristmas Vol. 3 is worth bending the rules for. This is a solid collection in terms of songwriting and performance quality, consistency, and listenability (from a poprock perspective, of course). Highlights include Evert Almond’s Beach Boys-inflected “Have a Very Very Very Merry Christmas,” Nick Frater’s perennial parental threat “Christmas is Cancelled,” Richard Turgeon’s Pansy Division-esque “Skippin’ Christmas,” The Stan Laurels’ dreamy “Noche Buena,” and the big guitar sounds of Ed Ryan’s “Noel (You Gotta Sing).” You can put this one on and just hit play – it’s that good.

It is my belief that melody makes the world a little less dark, so I do hope my little blog has given you the gift of some happy moments this year. And to all the featured artists, I hope it has filled your bank account with some financial love. With that in mind, hey readers, click on the artist links and let the spirit of giving begin! Merry happy everyone, wherever you are and whatever you believe.