A very exciting batch of genuinely breaking bands and songs on this post that bridge the Atlantic, going the distance from California to Michigan to Uppsala, Sweden.

The Brothers Steve debut album #1 is a concentrated dose of poprock goodness. This baby is all killer, no filler, beginning to end. From the double A-side blast of “Angeline/Carolanne” to the hip-shaking good time feel of “She” to the tongue-in-cheek hooky hilarity of “We Got the Hits.” And it sounds especially sweet on blue vinyl! I love the mix of acoustic guitars, electric leads and sweet harmonies. Check out the mix on “C’mon Pappy” with its 1970s English power pop sound, particularly the vocal stylings. “Songwriter” ups the crunch with a great driving beat, adding just a hint of a “Paperback Writer” refrain on the chorus. “Carry Me” pushes the jangle pedal hard while the vocals have a lovely Byrdsian swirl. “Good Deal of Love” is my current fave, a track that would not sound out of place on any Marshall Crenshaw album. “Sunlight” has listeners exiting the album on a sunny, acoustic guitar-drenched mellow vibe. With three-quarters of the melody rocking heroes from Tsar in the band, perhaps it’s not surprising how strong this debut is. And yet it’s a clear departure from their earlier work in style and delivery. Look for this on my top album list this year, a ‘you-can’t-go-wrong’ album recommendation from Poprock Record. Good Deal of Love

Los Angeles’ Bleached advance from the punky beach esthetic that defined the sonic palate of their earlier work to a more confident glossy poprock sound on their new record, Don’t You Think You’ve Had Enough? It’s immediately apparent on the opening track “Heartbeat Away” – now the vocals are upfront and taking charge of the tune, to great effect. But that can’t prepare you for “Hard to Kill,” a delicious slice on late 1970s ska-influenced new wave. The track practically leaps out of the speakers, oozing Parallel Lines-era Blondie riffs and vocal mannerisms. The album is full of retro-brushed delights, from the Go-Go-ish “Somebody Dial 911” to the dreamy “Silly Girl” to the more straight-up melodic rock and roll vibe of “Rebound City” and “Valley to LA.” This is another full play recommendation. In a world of seemingly interminable single-teasing, Bleached have dropped an album that is worth putting on repeat at your next party.

Joe Sullivan’s Growing Up Schlockstar is more than a sequel to his 2014 debut Schlockstar, it’s a clear advance on what were already recognized as formidable talents as a songwriter and performer. The record teems with familiar sounds: a Glen Tilbrook-esque turn of phrase and delivery, a bit of Jeremy Messersmith’s understated wordplay, and riffs clearly paying homage to bands ranging from the Beatles to Queen. And the hooks! They’re slathered all over tracks like “Mr. Positivity,” “Greenfield Acres” and “Time Machine.” Fans of clever lyrics are going to love “Gifted and Talented,” “Cheerleader” and “Space Princess.” Anyone who can effortlessly name check Starbuck, Captain Kirk and Jean-Luc Picard in a song should get extra points! 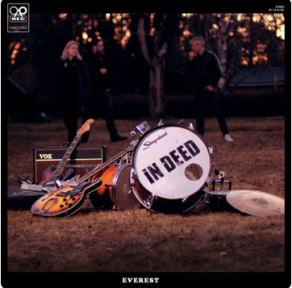 Everest is actually the 2019 American re-release of In Deed’s 2018 record. Still, I think the band from Uppsala, Sweden can rest on their laurels a bit as Everest was their first release in 16 years. Luckily, it’s fantastic! From the attention grabbing opener “Another Start” (with its distinctive Killers-like guitar opening) and throughout the breadth of the album, it quickly becomes clear this is a group full of surprises. Indeed, the very next song on the record marks a striking shift in sound and tempo: “Five Times a Day” is a more melody driven tune, delivered with acoustic guitars and a lush vocal-focused sound reminiscent of work from Holland’s Sunday Sun. At other times In Deed channel a modernized mid-1960s beat sound on tracks like “Don’t Need, Don’t Care” and the jangle-heavy “According to You” or shift to a late 1980s UK poprock sound a la the Darling Buds or The Primitives on “Heart Attack.”  Sometimes they just melodically rock out with great driving numbers like “Song to You” and “Flavour of the Month.”

For artists to ‘break out’ people have to break with some cash. Visit The Brothers Steve, Bleached, Joe Sullivan and In Deed online to help make this happen.

2 thoughts on “Breaking news: The Brothers Steve, Bleached, Joe Sullivan and In Deed”