It’s a new year – time to break out some brand new 2019 material. This collection of hooky poprock gems are fresh and date-stamped with the new year! 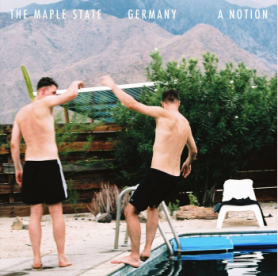 Manchester’s The Maple State formed in 2004, gigged until 2008, and then took a break before releasing a stellar comeback album in 2018, Things I Heard at the Party. Keeping up the momentum, they’re back this month with a double-A sided single release, “Germany” / “A Notion.” On first listen, the band sounds a bit post-punk until you hit the chorus on “Germany” and some pretty glorious power pop kicks in. Meanwhile, “A Notion” is more low key but still swinging, achieving an almost campfire sing-along sense of atmospheric fun. By contrast, Juliana Hatfield has never really gone away (and that’s a good thing!). Year after year she puts out pretty amazing albums, like last year’s phenomenal tribute to Olivia Newton John (check out Hatfield’s take on “Magic” – wow!). Her new, just released album is Weird and it is wonderfully so with another 11 strong tracks, though I’m presently hitting replay on “Sugar.” Somehow Hatfield makes her conflicted feelings about it clever, catchy and hilarious.

Scotland’s seeming bottomless pit of quality jangle gains more depth with Aberdeen’s The Vapour Trails. Their new extended 3 song single is named for one of the songs, “Godspeed It” but I’m more drawn the Rickenbacker-anchored jangle driving “The Inner Truth.” The vibe is a perfect distillation of late 1960s Byrdsian sibilant ringing guitar and nice harmonies. And the demo of their previously released “Golden Sunshine” is pretty special too. Though hailing from Pennsylvania and largely known for his distinctive guitar work, Steve Gunn has nailed a pretty ace Crowded House vibe on “Vagabond” from his new album The Unseen in Between. I mean, the guitar works here is still fantastic but it rightly remains secondary to his evocative melody and vocals. Rounding things out is some super-charged California pop from The Popravinas with their new single, “Sofia (CMU).” I love the candy-coated vocals on this track. Very late 1970s power pop, a vein mined by a host a great bands like The Connection and Tommy and Rockets. Looking forward to the band’s soon-to-released new album!

A new year means bills to pay from all that stuff last year. Help The Maple State, Juliana Hatfield, The Vapour Trails, Steve Gunn and The Popravinas make 2019 their greenest year ever.