An enormous amount of talent cruises through the internet everyday with yours truly discovering barely a smidgen of what’s out there. But there are times when I have to ask myself ‘how did I miss this’? Well, actually, it happens so much we have a whole department looking into it here at Poprock Record.

Fruit Bats is the least forgiveable because we previously featured the band’s delightful “Rainbow Sign” with its great acoustic feel and harmony vocals from 2003’s Mouthfuls. Somehow I missed their most recent album, released just last year.  Absolute Loser is a more muscular effort, showcasing a full band sound. “From a Soon-to-Be Ghost Town” ripples along with just a hint of that countrypolitan sound indie bands like so much, with vocals that remind of James Mercer of the Shins. “Humbug Mountain Song” kicks off nicely enough but then suddenly introduces a hypnotic banjo riff that keeps coming back, with a smooth 1970s soft rock chorus. Title track “Absolute Loser” is a slow burn hook, with vocals that remind me of You Won’t’s unusual harmonic charms. All in all, this is one eminently listenable album. From a Soon-to-Be Ghost TownAbsolute Loser

Ok, I can be forgiven for missing The Mayflies U.S.A. because they fall into the power pop ghetto that has long proved a hit with critics but a dud with mainstream audiences, at least in the period when most of their records came out. When guys like Matthew Sweet can barely register in the mainstream, there just isn’t much chance this sort of talent is going to register outside of niche circles. And that is shame because these guys (pop) rock!  The songs are hooky and the vocals meld into a special kind of ear candy. Just check out the title track from 2002’s Walking in a Straight Line – churning guitar hooks and pleasantly sibilant vocals galore. Or tune into “The End of Line” from 2000’s The Pity List with its subtle but seductive hook buried at the end of the chorus. I couldn’t hit replay fast enough. “I Just Wanna Be Your Gun” is also pretty special.

How I passed over Pete Droge is more mysterious because I actually have long owned a copy of The Thorns album he recorded with Matthew Sweet and Shawn Mullins. But I think I was going through a pretty heavy Sweet fix at the time and judged the album to be too low key. In any event, I recently stumbled across Droge in an iTunes ‘listeners also bought’ section and haven’t looked back. Droge has five solo albums and a soundtrack that are all pretty good but I find myself really digging 1994’s Necktie Second and 2008’s Under the Waves, the former channeling a mellow Tom Petty vibe while the latter has a strikingly spare acoustic demeanor. 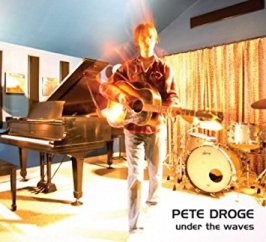 From Necktie Second “If You Don’t Love Me (I’ll Kill Myself)” reinvents the old “Mockingbird” song in an original way, all sparkling guitar lines and nicely reverby vocals. Meanwhile, I swear “So I Am Over You” comes on like a really great Tom Petty out-take. Fast forward to 2008 and the material from Under the Waves has Droge digging deep into more atmospheric territory on the title track or channeling Paul Simon circa Graceland on “Giving it All Away” with some very ABBA guitar. Even more recently his The Droge and Summer Blend project takes off in another direction, this time a folky/country harmony-rich concoction, with great tracks like “Sad Clown” and “Island.”So I Am Over YouUnder the WavesGive it All AwayIsland

Making up for lost time is a never too late proposition. Scurry on over to these web portals hosted by Fruit Bats, The Mayflies U.S.A., and Pete Droge to find out just how to catch up on their great recordings, live shows, and future plans.