Nashville’s *repeat repeat was a recent accidental iTunes front page discovery. With a Weezer-esque sense of style and design, I just had to click on the stylish organge-drenched album cover to hear what was inside – and what a treat I found! On Glazed, *repeat repeat come on like a more dance-able, clubby Fountains of Wayne, with a guitar-oriented poprock anchored by the band’s distinctive use of synthesizer. The vocals on this album also function like a finely tuned instrument, adding an extra depth to the subtle melodies. “Hi, I’m Waiting” eases you in with its slow roll out and earwormy synth shots before punching things up in the chorus. “Pressure” has a club dance groove drive given a rock and roll combo treatment and some hooky vocal ‘oh’s’ for good measure. “Fortunate One” is the hit single for me: understated but builds its melodic architecture piece by piece until you can’t resist hitting replay. “I’ll be the One You’re Going Old With” has a sweet sentiment and clips along with a chirpy feel good sound. “City of Stars” vibes “Stacey’s Mom” but geared down to a more dreamy tempo. “TTB” has flashes of early Paul Simon vocally but punks up as it goes along. And so on. This is a great album buy. Don’t miss their catalogue highlights either: both “Everybody’s Falling in Love” and “Girlfriend” from 2017’s Floral Canyon are both winners! Fortunate One

We’ve featured a lot of songs from American-Franco duo Freedom Fry. There is something so distinctive about their blend of almost whispered harmony and folksy charm. But it’s the tunes that ultimately carry them through, whether their own original material or a load of inspired covers. 2018’s Classic really was. So many great songs on an expertly executed album. Since them the duo have peppered us with series of expanded singles that take up new textures and unpredictable cover material. Like “Renegade – only Freedom Fry could strip out all the bombast of the Styx original, leaving the song’s uneasy essence remaining. “Black Mountain” gives the duo a chance to show off their formidable vocal layering techniques. “Hey Moon” has a lovely, lilting lullaby-like texture. “Yeah You” picks up the tempo and charges up the hooks. Then “The Sun is Going to Shine on You” shows how the band can work up a tougher yet still melodic sound. Freedom Fry brim with creativity and surprises! 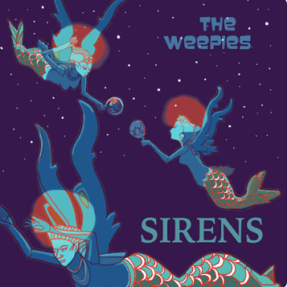 The Weepies ooze gentle sweetness with their carefully crafted harmonies and delicate arrangements. There is always something wistful about their performances: often quiet and filled with longing. “All That I Want” from their 2004 debut Happiness really captures the basic formula, which is further solidified with tracks like “Gotta Have You” 2005’s Say I Am You. From the same record check out the Simon and Garfunkel-worthy, shiver-inducing harmony on “World Spins Madly On” or the winsome “Nobody Knows Me All.” Then 2008’s Hideaway was a masterpiece, upping the poprock polish without relinquishing the folksy intimacy. The whole album is songwriting gold, from the engaging title track, to the entrancing “Little Bird,” to the single-worthy “Antarctica,” and so on. 2010’s Be My Thrill changed things up a bit, shifting things uptempo on tracks like “Hope Tomorrow” while 2015’s Sirens even introduced inspired covers like Tom Petty’s “Learning to Fly.” Health problems and parenting appear to have slowed The Weepies early productivity but their website reports a new tour for Autumn 2019. Perhaps a new record won’t be far behind.

Marriage brings a special kind of intimacy to musical collaborations, as our three cases illustrate. But it also needs money. Lots of money: for kids, houses, medical bills (in you’re in the States), and more. Visit *repeat repeat, Freedom Fry, and The Weepies and do your part to keep these couples in the black.