Jean Caffeine, Joe Goldmark, Keith Klingensmith and the TM Collective, Lasse Lindblom Band, Les Calamites, Matthew Sweet and Susanna Hoffs, Pete Townshend, The Connection, The Decibels, The Kids Are Alright, The Last Words, The Legend, The Lolas, The Queers, The Raveonettes, The Who 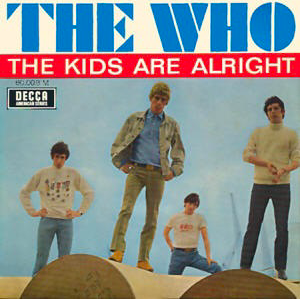 You don’t get a much more perfect poprock song than The Who’s “The Kids Are Alright.” Crunchy guitar offset by a perfect vocal melody, backed by killer background vocals and harmonies at key points. Curiously then, the song has been both covered and not that covered since its 1965 release. A quick spin through the web-o-sphere reveals countless live versions by big name acts like Pearl Jam, pub rob darlings Eddie and Hot Rods, glammers The Glitter Band, and many many others. But studio versions don’t hit the major leagues as much. In fact, they’re far surpassed by punk and indie treatments. Personally, I find the punk ones tend to lose the sweetness of the melody by leaning on the song’s ennui. I get it – they love the rave up ‘I hate the world!’ potential. But in this post we’re going to hew to the hooky side of things.

American bands seemed to groove to The Who the earliest in the 1960s, with a decided garage and psychedelic bias (e.g. The Count Five covering two Who songs on their debut in 1966). El Paso’s The Legend cranked up a winning cover with some very groovy organ in 1968. Meanwhile Miami’s The Last Words offered a distinctive interpretation of the song in the same year, altering the melody of the chorus. Sweden gets into the act with the Lasse Lindbom Band’s 1979 more straight up poprock version. Then things take an indie/punk turn with France’s Les Calamités in 1984 but this version still manages to capture the song’s essential (and necessary) vulnerability. The last version from this early period is Pete Townshend’s own demo of the song, recorded in sixties but only released on his Another Scoop album in 1987.

The new millennium has seen various acts cranking up power pop elements of the song. The normally very punky The Queers even out their sound to accent the song’s hooks. Not surprisingly, with Matthew Sweet and Susanna Hoffs it’s all super sweet background vocals and harmonies while tempering the more combustible sonic aspects of the tune. Possibly my fave cover comes from the reliably hooky The Lolas, featured on the 2004 Who tribute album Who’s Not Forgotten. And then for something completely different, there’s Joe Goldmark’s kooky but charming country instrumental version with John McFee on pedal steel.

More recently a new flurry of covers have emerged, demonstrating how this hit just keeps on coming. Both The Connection and Keith Klingensmith and the TM Collective offered up sleek candy-coated versions in 2013 while The Ravenonettes turned all shoe gaze with their cover in 2015. Just this last year Jean Caffeine put a bit of edge into her otherwise melodic treatment of the song while The Decibels hit the jangle pedal pretty hard in a more rocking rendition.

A great song is one that you can hear over and over and somehow never tire of. Not surprisingly, such tunes draw other acts to want to cover them. “The Kids Are Alright” is one of them and as you can hear above, it’s actually pretty hard to mess it up.