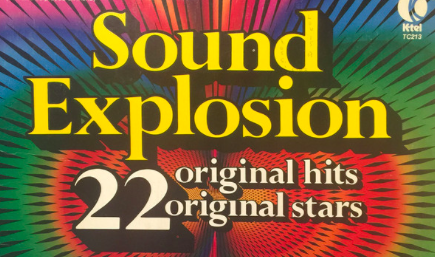 Thirteen original artists! Twenty featured songs! Springtime 2020 is witnessing an explosion of sounds, curated here specifically to ease your pandemic-induced isolation. It’s not K-Tel, but it’s the next best thing. And the best part? No groove-cramming or adverts for a bogus, non-working record selector. So get ready to add some hooks to your springtime playlists.

Since the early 1980s scribes have routinely dubbed Kyle Vincent’s 19 album body of work ‘soft pop’ but that changes with his new release Whatever It Takes. Well, sort of. There’s still a strong easy listening pop vibe to the album (he’s even written a song that name-checks Gilbert O’Sullivan, so that’s a strong clue) but with former members of the Raspberries for a backing band on some tracks, things rock up a bit in a 1970s soft focus, low wattage power pop way. It’s there on the breezy Shaun Cassidy-esque “Bubblegum Baby” as well as my choice for b-side, “Hard to be Happy,” with its low key ABBA notes. Another incredibly productive fellow is Brian Jay Cline, with 13 albums and 4 EPs out since 2001 by my count. His most recent EP is Songs for a Generation of X’s and it taps that vein of melodic Americana that Cline does so well. I’ve been hitting repeat on the addictive “Two Left Feet” with its great Springsteen harmonica and irresistible hooks. Heading over the Valencia, Spain Baby Scream has a new album of covers out entitled, predictably, Just Covers, and this time everybody’s fave DIY John Lennon definitely colours outside the lines. This is fun collection, with inspired reworkings of Cyndi Lauper, the Psychedelic Furs, 10cc, Culture Club and more! I’m singling out for a double A side the muted yet rollicking “Secret Agent Man” on one side with the tight pop-rocking Fastball track “Warm Fuzzy Feeling” on the other. Back in North America, if anyone doubts that Montreal is Canada’s undisputed cool city, slip Pale Lips 2020 LP After Dark on the turntable. Self-described ‘dripping mascara slopped rock and roll with sprinkles,’ the party vibe is evident from the opening chords of “Some Sort of Rock and Roll,” the album opener. Overall, the songs are variations on a 1950s-meets-1970s workout, except for “That Old Ghost Don’t Lie” which changes things up, slowing the tempo, and anchoring everything with a spooky lead guitar. B-side? Definitely the hilarious romp “All My Baby Brought Back Was the Blues” – such great lyrics!

If anyone has written an anthem for our times, it’s Dolph Chaney. “It’s Ok” (from his recent Rebuilding Permit) was written before our current state of affairs but its message definitely resonates now. Well, frankly, it’s always a pretty relevant message. And Dolph loads it with a host of nice melodic twists and turns, shifting the song’s dynamics like a hooky mood swing. Also love the distinctive synth solo at the 1:50 mark! Bill Majoros describes his new Foreign Films record Ocean Moon ‘retro-futurism, musical technicolor and groovy beats’ and I’d have to agree. It’s certainly a departure from his previous 2018 set, The Record Collector, a sprawling, 3-album stylistically varied offering. Now Majoros turns to a somewhat familiar, pleasantly throwback sound circa early 1980s. I’m particularly enthused about the title track “Ocean Moon” with its breathy Elvis Costello-meets-Roy Oribison vocals and Travelling Wilburys rhythm guitar. Another new single echoing some classic EC to my ears is the latest from former Cry! Leader Tommy Ray. The new LP is First Hits Free and check out the catchy lead line and brash guitar driving “Hey Susanne.” The dance floor never looked so alluring. For a b-side to this single, I’d add “Tuesday’s Girl” with its mid-1980s British energy and familiar vocal snarl. Honourable mention: “Gone South” – love that organ opener! Chicago’s Beach Bunny are doing that contemporary dissonant pop sound with a bit of vocal grit in the mix all over their debut record, Honeymoon. Personally, I’m loving the deep cut single, “Cloud 9” with its hooky bass line and rocking-out swinging chorus. I could see “Ms. California” as the b-side with its almost FOW-style chorus and crunch rhythm guitar. On this record, feeling bad never felt so good.

Speaking of alienation, there are times when West Virginia’s Rozwell Kid sound like they’re channeling some serious Weezer love, like on “Letterman” from their new Dreamboats 2 album. But then they shift gears and up the pop quotient on the obvious single, “Absolutely.” You can’t pin these guys down, other than to find the fun in what they do. The LP is celebration of pop culture, with tunes celebrating David Letterman, Dr. Doom, a possible fourth sequel to Back to the Future, and even an Enya cover! Now if you need a driving insistent guitar/synth combo, have I got a song for you. Nicholas Altobelli picks up the pace from 2019’s more low key Vertigo LP with his new single, “Ghost.” This is the distinctive melodic rock and roll that drew me to Antobelli releases like the great EP The Day-Olds and single “Exit Polls.” B-side “Wonder” is also a winner, with its charming, light 1950s ambience. Now, for a bit of Merseybeat, look no further than Tommy Sistak. Music for Sale is the new record and “On My Way to Somewhere” manages to work in that familiar Liverpool 1964 sound without sounding derivative. Like visiting an old friend who still has a few surprises in store for you. Speaking of old friends, people waiting for a follow up to Ed Ryan’s super 2017 Furious Mind have something to tide them over given his recent collaboration with Orbis Max on “Everybody Wonders.” The song is a solid slice of poprock, featuring some cool organ solos and nice vocal interplay. The song bodes well for new album of Ed Ryan tunes!

Hey, let’s end on with a guaranteed ear worm. I know I name-drop Fountains of Wayne a lot but Steven Wright-Mark sounds like he’s channeling a lost deep cut from Welcome Interstate Managers with “Underground,” from his recent EP Wake Up! If I had a Poprock Record chart this one would definitely be zooming up it. The vocal delivery, the background instrumentation with that seductive Gotye feel, it all adds up to ‘hit single’ to me.

Whew! That was a lot of should-be hit-single ground to cover. But health crisis or no, the chords must play. Assemble your own bargain hits collection by clicking links above. Looking for vinyl? You can the physical platter for many of these artists at Kool Kat Music.