In the late 1980s and early 1990s I had the pleasure of acting as a roadie of sorts for a guitar-god friend of mine whose band had a brief blast of Canadian music fame. Bruno Gerussi’s Medallion was the brainchild of Vancouver Province rock writer Tom Harrison, an outlet for his love of 1960s garage rock and various forms of 1970s alternative rock and roll. In 1989 they were signed to WEA Canada and released one album, In Search of the Fourth Chord. 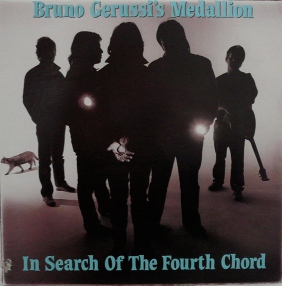 They took their name from Canadian actor Bruno Gerussi, who starred for 18 years as Nick Adonidas, a beachcomber on British Columbia’s coastline in one of the Canadian Broadcasting Corporation’s most successful shows, The Beachcombers. At the same time he hosted a cooking show where he would wear a very large medallion around his neck, thus the name of the band. I was at the show at the Town Pump in Vancouver where Nick actually met the band and heard some of their music. I’m not sure it was really his style. As a band, BGM showcased all the classic 1960s and 1970s underground sounds but, frankly, sounded too good to be garage rock and too polished to be punk, while Tom’s singing was more like talking. Reading the liner notes for BGM’s sole album, the record sounds surprisingly coherent given the changing line-up of players. In terms of songs, both “Ginger’s Alright” and “Tell Me What You Found” stand out for me, the former for the tune and the latter for the musical arrangement. Ginger’s Alright Tell Me What You Found

BGM eventually morphed into Little Games, a moniker taken from the Yardbirds’ record of the same name. However, their recording contract with WEA lapsed and Little Games’ only record, Guitar Damage, would be released on the band’s own BGM Record label. And that was a shame, because in so many ways Guitar Damage was a more solid record. For instance, unlike BGM, Little Games had a stable line-up of players, Tom was actually singing more than just talking his way through the songs, and the song selection itself was strong in terms of covers and original material. I particularly liked the band’s composition “Muswell Hill Ray,” a name-dropping tribute to songs by the Kinks’ Ray Davies, as well as their cover of the Standells’ garage rock classic, “Sometimes Good Guys Don’t Wear White.” Muswell Hill RaySometimes Good Guys Don’t Wear White

But the standout track is the band’s amazing cover of Gene Clark’s “So You Say You Lost Your Baby.” The song should have been a big hit by the Byrds, but as Clark had just left the band in 1967 he recorded it himself on his first solo record in what was a rather lacklustre, singer/songwriter treatment. Subsequent covers rocked it up a bit but didn’t really capture its greatness. But the version on Guitar Damage rightly recasts the song back into a 1966-era Bryds register, complete with ringing Rickenbacker electric twelve-string guitar. The song shimmers with lead guitar player Jimmy Walker’s solid playing – it is also Tom’s most accomplished, confident performance as a vocalist. Sadly, this was a band really coming into its own as performers at the very moment their career trajectory stalled.So You Say You Lost Your Baby

Today some of the band’s BGM-era catalogue is available online while the Little Games material is harder to find. The band also did a killer live version of the Kink’s “Picture Book,” which might be available on their hard to find live recording. I also took a number of pictures of the band from various shows, which ended up in singer Tom Harrison’s possession but have not surfaced. A proper online retrospective of the two bands’ accomplishments remains largely unavailable, though some information can be found on Harrison’s website.