Just stepped out the Tardis, back from a quick trip to San Francisco circa 1967 and I could swear I heard Daisy House blasting out of some greasy spoon on the Castro. They’re that authentic. Welcome to Daisy House. If you love Joni Mitchell, the Mamas and Papas, the Byrds, Buffalo Springfield, or Crosby, Stills, Nash and Young, then you are going to want to stay awhile. I went to their bandcamp site to download just a few choice cuts but ended up buying it all – they’re that good. It’s not just that they emote a particularly addictive blend of 1960s folk rock + killer harmony vocals, the songwriting is also first class. Daisy House are a father and daughter duo, Doug and Tatiana Hammond, with dad writing and playing on nearly all the songs while both provide vocals. Over four albums, they have developed their clear influences into an impressive body of work. 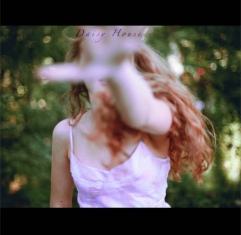 The debut is simply 2013’s Daisy House. The basic formula is here: twelve string acoustic and electric guitars, a celtic twist in the songwriting, with vocals reminiscent of Joni Mitchell (on “Ready to Go” and “Cold Ships”), the Mamas and Papas (on “Two Sisters”), and Richard and Linda Thompson (on “The Bottle’s Red”). The Byrdsian influence is particularly strong with dad’s vocal on “Statue Maker.” 2014’s Beaus and Arrows reproduces the ambience of the debut, with a few new surprises, like a very early solo Paul Simon atmosphere on the Salinger-inspired “Raise the Roof Beam Carpenter.” I agree with Don over at I Don’t Hear a Single, the first two albums draw heavily on 1960s British and American folk idioms.

Things break out in new directions with 2016’s Western Man. There is an eerie mystery to the musical ambiance of the opening track, “Lilac Man,” that signals a significant stylistic shift. “Yellow Moon Road” expands the duo’s palette to include more 1960s garage rock sounds, particularly some cool organ. And the songs are amazing. “Like a Superman” has a clear Mamas and Papas stamp, “She Comes Running to Me” is lathered with great harmonies, while “Twenty One” opens with a deliberate homage to “When You Walk in the Room” before branching into its own original sound. But the album’s highlight is undoubtedly the hit single-worthy “The Boulevard.” You can just hear Mama Cass belting it out while the Wrecking Crew provides the crisp, swinging backdrop – except that it is not those amazing performers, it is these amazing performers: Daisy House. 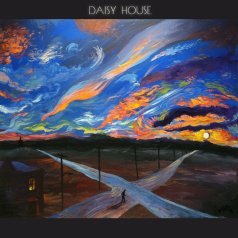 This year’s Crossroads is another breakthrough for the duo, putting their sound more solidly on the rock side of folk rock. On “Languages” Tatiana sounds like a young Chrissie Hynde. This is the hit single, but there are many more highlights. The title track, “Crossroads,” has some Tom Petty Wildflowers-era bite while “Leaving the Star Girl” ramps up the Byrds influences. Dad is featured vocally on the evocative Paul Simon-esque, acoustic-based “Pristy Lee” and the more Byrdsian “The Girl Who Holds My Hand,” both strong songs and performances. But the highlights for me, beyond the obvious single (“Languages”), are two Tatiana vocals, the Kate Bush-like atmosphere on the beautiful and haunting vocal of “Albion” as well as the more Chrissie Hynde delivery of “Night of the Hunter.”

Daisy House are a fully formed artistic wonder, inspired by the electric folk music and harmonies of the 1960s but entirely their own thing in terms of original material and performance. Visit them online, buy their music, see them live, now.