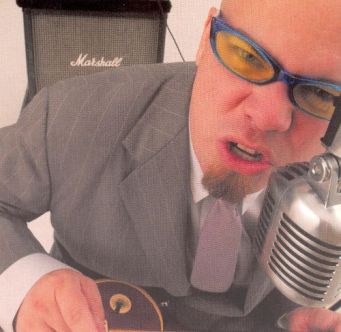 I love unusual life stories. Like Charlotte, North Carolina’s Leisure McCorkle. William ‘Lee’ McCorkle is Leisure McCorkle, the band and its larger than life leader, songwriter, guitar player and vocalist, with help from some occasional band members. In 1997 he launched his recording career with the largely homemade EP Nappy Superstar. Since then he’s released another EP and three albums, only two of which are available digitally. The wrinkle in McCorkle’s story is that he took a break in his rock and roll career to get a PhD in evolutionary and cognitive psychology and do the professor thing. But that didn’t stop him from roaring back in 2016 with another killer album after a break of thirteen years!  Most attention on the internet focuses on his 2003 release Jet Set Baby and the more recent 5000 Light Years Beyond the Speed of Sound, the only recordings readily available to music consumers. Hopefully the rest of his back catalogue will cross the digital divide soon, but in the interim our focus will be on these two releases as well. 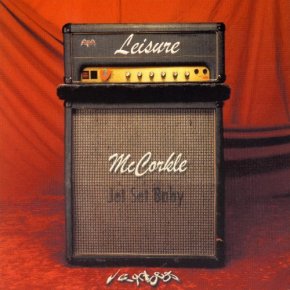 Jet Set Baby is 44 minutes of blistering rock and roll fun. Internet reviewers have rightly highlighted the nods to the early new wave sound of Joe Jackson, Elvis Costello and Graham Parker, with a healthy dollop of early Cars guitar crunch and some very creative keyboards. But the influences are always reminiscent, never derivative, in part because the songwriting and execution are so strong. Check out the languid, chorus pedal-drenched guitar opener of “Does She Really Know?” before it segues into some great hooks. Or the transition from spare electric guitar to anthem-like chorus on “Like That.” McCorkle does slow things down occasionally on nice tracks like “100%” and “Dissin’ You” but mostly the record rocks out with hook-filled masterpieces like “This Girl,” the swinging “Alcohol,” and achingly sweet “Blum’s Lullaby.”  These are should-be hits by any measure. Does She Really Know?AlcoholBlum’s Lullaby

Now fast forward past a decade of building an academic career to when McCorkle decided to return to his first love in 2016 with the release of 5000 Light Years Beyond the Speed of Sound. The first thing you notice on “Warehouse,” the opening track, is a little less vocal edge, a little less urgency in hitting the rock and roll marks. Here McCorkle is willing to let the sonic effect wash over the listener a bit more, at least until the lead guitar comes in near the end with a slightly edgy but still melodic flourish.  “Transmission” sounds a bit late 1970s pop to me a la the California sound. “Acting Like a Friend of Mine” reminds me a bit of some of Springsteen’s more recent melody-heavy poprock releases while “Turn It Up” harkens a bit more back to his earlier material. One of the standout tracks is “Ghost Angeles” with its lovely vocal arrangement and strongly acoustic backdrop, very Teenage Fanclub-esque, as is the album’s closer “The Loneliest I’ve Ever Been.”WarehouseActing Like a FriendGhost Angeles

So this review is no ‘revise and resubmit’ recommendation. The professor’s musical publications are highly citation worthy! You can catch up on the musical side of Dr. McCorkle’s career at his website here.