All the Pain That Money Can Buy, Fastball, I Will Never Let You Down, Keep Your Wig On, Little White Lies, Make Your Mama Proud, Step Into Light, The Harsh Light of Day, The Way

Are you a fan of Fastball? If you love straight up rock and roll with a keen sense of melody, you should be. Fastball is another band that I somehow missed when they broke out in the 1990s and have only just discovered recently. Now when you mention Fastball to people they nearly always know “The Way” and that’s about it. Sure, it’s a great song but I’m not even sure it’s the best song on that album, let alone the defining moment of their career. This is band that just keeps getting better and better with each album release. 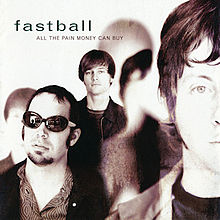 Their debut album from 1996, Make Your Mama Proud, lays out the basic genius at work here. This is a band that gels solidly around the rock and roll combo fundamentals – solid beat, hooky lead guitar lines, and a generous helping of harmony vocals – captured nicely in the featured tune here, “Seattle.” Then came their breakout album, 1998’s All the Pain that Money Can Buy with its monster single “The Way.” Personally I prefer “Fire Escape,” “Slow Drag,” and the brilliant “Out of My Head.” The band followed up that hit album with The Harsh Light of Day, a record that really pushed the development of their sound melodically and sonically (let those guitars ring!), apparent on tracks like “Don’t Give Up On Me.” But audiences didn’t take to the new sound and sales fell off precipitously.

The band pressed on in 2004 with what might be their greatest achievement, Keep Your Wig On. The songwriting on this record is amazing, with Petty-esque brilliance on tracks like “Perfect World,” and “Our Misunderstanding,” or the easygoing, almost Eagles-like confidence of “Someday” or “Mercenary,” or the Mexicali fun of “Red Light.” Five years later, Little White Lies took the band into a more melody-drenched direction and the should-be hits are many: check out the James Bond undercurrent to “Little White Lies,” the great swing of “Mono to Stereo,” or the nice Beatles’ touches and bouncy piano on “She’s Got the Rain.”

Perfect WorldOur MisunderstandingShe’s Got the Rain

Fast forward to 2017 and Fastball are back after an absence of eight years with what I am prepared to boldly declare may be their best record yet: Step Into Light.  The record blasts off with “We’re On Our Way,” a rocking number with a few ELO flourishes on the keyboards. Vocals give way from the more rough-hewn Mike Zuniga to the oh-so-smooth Tony Scalzo on the next track, “Best Friend,” a song that screams hit single with its propulsive, driving hookiness. Other candidates for hit single include the Beatlesque “I Will Never Let You Down” (with its great video!) and the very catchy “Just Another Dream.” The care in choosing the instrumental mix on this record is impressive. Check out the nice guitar bits on “I Will Never Let You Down” that echo George Harrison’s simple and straightforward guitar lines on a host of mid-career Beatles records. Or the jaunty acoustic guitar that anchors “Behind the Sun,” clearly an homage to McCartney’s felicitous picking on tunes like “Mother Nature’s Son.” I could go on. Suffice to say, there isn’t a bum track here – if you like one song, you’re going to want the whole album.

So that’s my pitch for Fastball, your soon-to-be favourite new/old rock and roll group. I say, buy their records and see them on tour this summer. Get started at Fastball’s internet real estate for all the details.