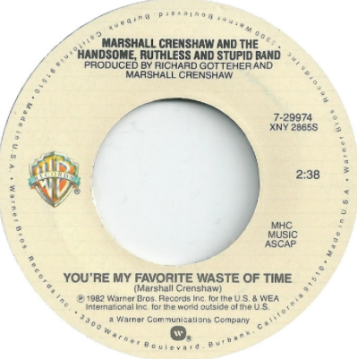 What started out as a home demo B-side has gone on to become one of Marshall Crenshaw’s most enduring and widely covered songs! Crenshaw recalls that “You’re My Favorite Waste of Time” was written while he was still employed playing John Lennon in the off Broadway production of Beatlemania, and that it was one of his very first forays into songwriting. Marshall’s version of the song – still the definitive treatment IMHO – has him playing all the parts in his New York City apartment home studio in 1979, despite being credited on the 45 to the ‘Handsome, Ruthless and Stupid Band’ when released as the B-side to “Someday Someway” in 1982. Cover versions have emerged at regular intervals since then. What draws people to the tune? No doubt it’s Crenshaw’s unmistakable, unforgettable vocal hook in the chorus that gives the song its classic and timeless poprock sound.

Marshall’s original version of the song has a curious tempo and an eerie vocal harmony. It’s sounds just a little out of kilter, with distinctive keyboard notes, and a lovely stumbling finish. Why he didn’t elect to produce a polished professional studio version is unclear. Still, the demo version is charming. The song’s covers have ranged all over the style map, from country to dance club to rock and roll. But not every version is a winner, from my poprock-biased point of view. Bette Midler’s slick, poppy  early 1983 cover no doubt gave the song it’s major exposure to American audiences, while Owen Paul’s more dance-pop take made the UK top ten in 1986. But neither version really grabs me. By contrast, the Bellamy Brothers’ version from their 1985 LP Howard and David has real heart. So I’m gonna be choosy here, featuring only the covers I think honour the spirit of Crenshaw’s vision for the song.

Crenshaw’s musical oeuvre stands at the crossroads of rock and roll’s country and rhythm and blues roots. Not surprisingly then, the covers that work best draw from these traditions too.  Kevin Johnson and the Linemen really nail the song on their 1991 debut album, Memphis for Breakfast, with an alt country-fied rock and roll sound. They almost sound like Crenshaw himself! Then the covers really start coming in the new millennium. Crenshaw himself played on Ronnie Spector’s 2003 cover of the song from her EP of his tunes, Something’s Gonna Happen, so it rocks, not surprisingly. Jeffrey Foskett is well known for his work with Brian Wilson and the Beach Boys, particularly on vocal support. Predictably, he makes the most of the vocal machinations embedded in the song, especially in the chorus. A poprock superstar version came out in 2013 from Matthew Sweet and Susanna Hoffs, a bonus track addition to volume 3 of their Under the Covers series. And the song has also gone international with Irish, Swedish and Norwegian bands taking it on, from Johnny Logan, The Drowners and Kjetil Linnes respectively, producing great straight-up, poppy, rock and roll renditions. The most recent cover I could find can be found on Rachel Kiel’s super 2017 release, Shot From a Cannon.

Who should have covered this song? The Everly Brothers, that who. But barring that now irreparable oversight, there’s room for more time-wasting song-wise. Click on the links above to get to know these cover artists other material, and don’t forget to give Marshall lots of love too!