When Cut Worms’ 2018 album Hollow Ground came out I was a total convert. I loved the throwback 1960s polished poprock sound of “How Can It Be” and “Don’t Want to Say Goodbye” with its shades of The Cyrkle and Paul Simon melodic hookiness. But somehow I overlooked his prior 2017 EP release Alien Sunset. Now that he has a few new singles out, it seems an ideal time to revisit the musical pleasures of Cut Worms, then and now. 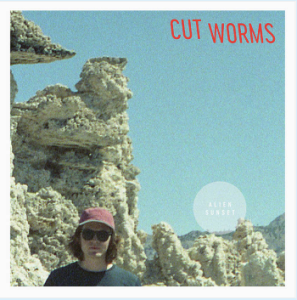 A skip through the six songs that comprise Alien Sunset, one might be tempted to cast it as a mini-Hollow Ground, minus a bit of the polish. There is some overlap, with reworked versions of “Don’t Want to Say Goodbye” and “Like Going Down Sideways.” But the EP has distinct charms of its own, like its lovably ragged indie quality and a kind of insurgent pop urgency to the tunes (particularly apparent on the title track). Or the way that the stripped down “Like Going Down Sideways” sounds like a melody-pumped take on Leonard Cohen. Some of Cut Worms’ country balladeering roots show up more here on cuts like “A Curious Man.” And I particularly like the original “Don’t Want to Say Goodbye” which sounds a bit folkier or roots-era Everly Brothers.

Fast forward to 2020 and Cut Worms is extending his songwriting range, stretching out the development of the tunes into an early 1970s country rock mode. His new single, “Unnatural Disasters” takes it time delivering the hooks, first creating a solid backdrop of a laidback Bacharach-style country theme. But this subtle tune pays repeated listens. B-side “Baby Come On” is a winner too, though perhaps more direct in its melodic payoffs. There’s something so familiar about the song’s cadence, its arrangement, but the final product is still somehow fresh and timeless. Can’t wait to see how these new songs will factor into a new Cut Worms album.

Get your supply of Cut Worms from bandcamp or right from the source or from the usual e-music distributors.