Daisy, Finland, I Just Don't Believe It, Ornament and Crime 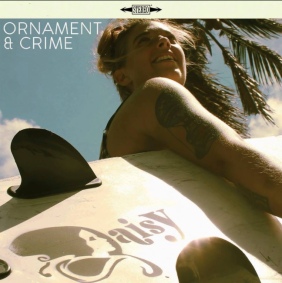 Got the heads up on Daisy from Don over at I Don’t Hear a Single, a very smooth more-pop-than-rock band from Turku, Finland. Don and a lot commentators have focused on the most recent single, “A Little Love” but I think the should-be hit is undeniably the flawlessly constructed “I Just Don’t Believe It.” To my 1970s-80s trained ears, a hit single rolls out in a very particular way to build up interest and tension. This song is a marvelous example of that formula, from the spare acoustic guitar opening, to the killer hook in the chorus, to the restrained character of the verses that keeps the listener on edge waiting for the melodic payoff that’s coming. Even the instrumental break is perfect, with just enough variation before hitting the song’s main melody line hard. This song is a bit of AM radio magic, a sure fire regular rotation choice back when radio made the hits. “I Just Don’t Believe It” appears on the band’s 2017 release, Ornament and Crime, an album that features a range of material, including more upbeat poprock on “Strangers Yesterday” and “Haven’t Always Been This Way,” along with some ELO-ish pop on “Two of Us.” Now I’ve just got to track down their back catalogue!

I Just Don’t Believe It

You don’t have to go to Finland to check out Daisy (though it is pretty cool place, in both senses of the word). You can e-find them on Facebook and iTunes.