No pandemic is gonna stop us twisting that radio dial to find out just what is out there music wise! Today’s featured acts take ‘moody’ and ‘strange’ in all sorts of melodic and unexpected directions. 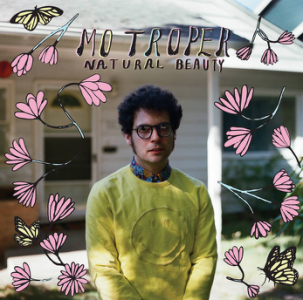 All my favourite poprock artists are growing up. Here with another 30-something pre-midlife crisis album is Mo Troper and his wrenching pain and discomfort adds up to 34 minutes of sweet sweet listening pleasure for us on his latest, Natural Beauty. Similar to Gregory Pepper (whose recent I Know Why You Cry is another winning sonic rendering of 30-something issues), Troper is toting up his 20s shortcomings with a bevy of frank, focused, but still melodious tunes. And like Pepper, Troper’s latest may be his most mature, fully realized work to date. “I Eat” kicks things off and sets the tone for the album, with its serious theme and carefully manicured production. Natural Beauty is just full of wonderfully layered sounds, strikingly varied keyboard flourishes, and an often naked honesty on the vocals front. Then again, “Your Boy” is the other side of this record, a textbook poprock masterpiece, anchored by a brilliant La’s-like jangle guitar hook at the start which just keeps mutating across piano, electric guitar and a slew of melodic vocals. This song is the soundtrack to a 1960s montage sequence where the boy meets a girl and joins a band and then a host of happy stuff happens. More serious themes emerge on “Potential,” “Lucky Devils” and “Better Than Nothing” but still they remain perky, poppy numbers. Possible influences abound here, with perhaps a bit indie 10cc or McCartney-meets-Morrissey on “In Love With Everyone” or a McCartney/Shins combo on “Your New Friend,” while “Everything” really reminds me of Apples in Stereo’s “Seems So” period. Personal fave: the new wave-ish “Almost Full Control” with its hypnotic bass work. For me, Natural Beauty is heading straight to the ‘best of 2020’ list, a must-have-the-whole-album release.

Melbourne’s Danny McDonald is a veteran of the Aussie indie music scene, playing on over 70 different projects since the early oughts. But one listen to his latest EP Modern Architecture and you’re going to be wondering where has he been? How has a guy this talented kept such a low international profile? Right out the gate, McDonald grabs the listener full force on the supercharged power pop should-be hit single, “Cordyline,” with its Big Star hooks and Brydsian background vocals. Then things rumble-guitar along nicely on the touching, rootsy duet with Anna Burley, “The Suburb I Grew Up In.” The 58 seconds of “Judge Me for my Art, Not Where I Live” sounds a lot like a punked up treatment of a great lost Plimsouls track. “Commuters Lament” vibes just a little Jayhawks while “Keeping the Dogs at Bay” is in the same vein as Richard Turgeon’s stolid stripped-down rocked-up pop. My only complaint about Modern Architecture is that is all ends too soon!

Another winning act from Melbourne is Adam Madric’s latest project, Pure Moods. On their debut album, Upward Spirals, there’s a fleeting Teenage Fanclub vibe at times, but on the whole this record is marked by a distinct sound – the rhythm guitar. More than is typical, it’s up front in the mix, anchoring the sonic portrait of the band. I love what sounds like an envelope of sound, the jangle drone, that opens the record on “Tide” and remains on “Backwards World.” Things shift gears with the title track which grooves along with a very 1970s soft rock rhythm guitar – that is until the Kraftwerk keyboards kick in and the whole thing slides in a different direction. There’s a tempo uptick on “Sideways Glance” and the jaunty “Sparkle” and both tunes shine melodically. Pure Moods’ Upward Spirals makes for intriguing, ultimately enjoyable listening with catchy songs that ride the tension between their lively musical performance and Madric’s somewhat low key, alienated vocals.

Taking a spin through Strange Passage’s Shouldn’t Be Too Long makes you realize just how good all those Morrissey solo albums could have been if they’d just sounded like this. And these guys are not even from some dreary northern British former industrial town but they’ve nailed the jangle alienation of the Mopster and his guitar pals. Seriously though, the songs here bubble with Smithian fun, like the energetic “Cloying Melody” with its rush of guitars and R.E.M.-meets-The The vocals. From the opening cut, “Idle Time,” it’s clear this is a really strong outing song-wise. Frankly, I can’t find a single track I wouldn’t hit replay on. Ok, maybe “Shouldn’t Be Too Long” seems special for cranking the sparkle on the guitars or “Ode” for being so Paul Simon doing Morrissey. Despite the comparisons, Strange Passage are not some wannabe something else band. They work this sound into something quite their own and it’s a pleasure to hear.

Now more than ever bands need our support to keep body and soul together! From the comfort of your self-distancing music room, check out Mo Troper, Danny McDonald, Pure Moods and Strange Passage on the internet to get their latest product.