Carreras de Aviones, Mine Would be the Sun, Scratch Buffalo, stars on fire, Super Ratones, The Soviet Influence, The Suitesixteen, The Suncharms

Today’s mailbag is brought to you by the letter S. I swear this happened totally by accident! Somehow everyone waiting in the queue had an S name. 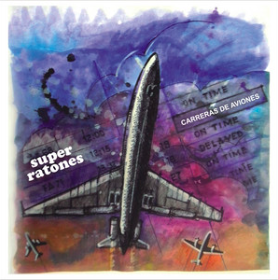 Starting in the global south, Argentina’s Super Ratones (translation: Super Mice) are veterans of that country’s rock and roll scene, forming in 1985 and releasing eight albums over their decades-long career, even surviving the loss of founding member and lead singer José Luis Properzi to cancer in 2015. Yet their 2019 release, Carreras de Aviones (translation: Airplane Racing) sees the band back in top form with strong collection poppy rock and roll numbers. Title track “Carreras de Aviones” has all the key elements: a rollicking rhythm salted with strong melodic hooks. That vocal harmonies would be strongly in evidence is not that surprising for a band initially compared to the Beach Boys on their first few recordings and you hear it here on tracks like “Me Gusta La Lluvia” and “Si No Tuvieras Miedo.” On the whole, the album is a great addition to their catalogue. And, by the way, you wouldn’t go wrong dipping into any of the previous seven releases either.

In the ‘now for something completely different’ part of our programming, we’ll push the boundaries of our self-declared genre limits a bit with two acts that are more indie raucous than muy melodic. Calgary’s Scratch Buffalo mostly combine a raw ‘rawk’ sensibility with a talky in-your-face vocal style that’s typically not my scene. Having said that, I do really like album closer “Life Somewhere’s Else” with its earthy combo of mellow acoustic guitar backing, tasteful lead guitar and understated vocal. So too Limehouse, Ontario’s The Soviet Influence is working an alienated indie rock seam with nary a jangly guitar in sight. Still, “Rust” has a lulling earwormy quality that gets to you on repeated listenings, also carried by a nice acoustic guitar, a remote but lovely lead guitar line, and affectingly intimate vocals.

Ok, back to our regular programming …  A former member of pop punk pioneers Bum (Rob Nesbitt) has dropped his snarl but retained the band’s signature hooks on his new project The Suitesixteen and I love it. Don’t get me wrong, Bum was great, but it’s no secret I tend to prefer The Beatles over The Stones. Hints of punk are still there on tracks like “Bob Greene” but now you can really hear how the melody shines through, particularly vocally. Across the album as whole, comparisons to Green Day or Bowling for Soup would not be out of order. But then there’s the more nakedly Big Star-ish “A Very Well Known Secret” and “That Sweet Ache.” Personally, my fave track is the swinging closer “Why I Love You and I Did.” The album is entitled Mine Would be the Sun and it is worth more than a casual listen.

Nobody has press quite like Seoul, South Korea-based stars on fire. Described as ‘rough, mischievous, and utterly charming,’ a ‘drunk Lloyd Cole seizing control of Felt,’ and a ‘well-crafted, lo-fi blend of shoegazer psych-rock and jangly indie-pop’ the band’s two 2019 EPs definitely throw a lot of influences into the hopper. To my ears, there a bit of The Smiths, particularly on those hooky electric guitar openers on tracks like “stuck somewhere” and “I Need Nobody (that’s you).” At other times they sound like The Catherines with hungover Leonard Cohen on vocals. Wherever your dip into these EPs there’s a winning combination of distinctive guitar work and even more distinctive vocals. Finally, rounding out today’s mailbag is a should be hit single from Sheffield’s The Suncharms. The band’s original era stretched from 1989-93 but they reunited in 2018 and new recordings have since emerged, like “Jet Plane” featured on the fadeawayradiate records compilation F.A.R. Out. Very The Church, with that charming mixture of pop hooks amid a general psychedelic vibe.

I love getting mail! I’m always curious to hear what people have sent along and I’m impressed that most pay close attention to the general style of music I’m peddling. Let’s reward such diligence with impromptu internet visits to Super Ratones, Scratch Buffalo, The Soviet Influence, The Suitesixteen, stars on fire, and The Suncharms right now.