Throughout my life, Nick Lowe has been poprock constant. No matter what was going on, the arrival of a new Nick album was always an occasion. I probably first heard him as most other people did when “Cruel to be Kind” hit the radio in 1979, and Rockpile’s “Teacher Teacher” cemented my love of his style a year later. And what’s not to like? I had grown up consuming my parents’ record collection – Chuck Berry, Hank Williams, the Everly Brothers, Buddy Holly, the Beatles, etc. – and Nick was like a new wave synthesis of all those influences! Over the past four decades he’s grown as an artist, shifting his songwriting style and performance, but somehow managed to stay true to these roots. Currently on tour with retro rocking Los Straightjackets, Lowe continues to release great songs.

In what follows I review Lowe’s album career, highlighting the non-hit songs that stand out for me as great overlooked poprock tracks, ones I think are strong on melody and hooks. No doubt other Lowe fans might choose differently but these are the ones that stuck in my head and remain eminently listenable to me, even after countless hearings.

Discovering Lowe in 1979, I had to play catch up with his earlier career releases. “I Can See Her Face” from Kippington Lodge was Lowe first songwriting credit in 1969 and arguably that band’s best tune. From there Lowe wrote most of Brinsley Schwarz’s material over the course of six official album releases (seven if you include the long unreleased It’s All Over Now) from the early to mid-1970s and he would recycle some of that material later as a solo artist, most famously “Cruel to be Kind” and “What’s So Funny About Peace, Love and Understanding.” There’s some strong material on those records but “The Ugly Things” (from 1974’s New Favourites, later covered by Elvis Costello) really stands out for me as reaching the Nick Lowe solo-era standards for melody and hooks. Solo material started emerging in 1977 with the EP Bowi and various one-off singles (like the faux Bay City Rollers tributes or the label-ripping “I Love My Label”). Lowe’s first solo album, Pure Pop for Now People (or Jesus of Cool in the UK) contained a host of great songs (“Marie Provost,” “So It Goes,” “I Love the Sound the Breaking Glass”) but I think “Tonight” really captures Lowe’s talent for tuneful, ballady material. Brinsley Schwarz – Ugly ThingsNick Lowe – Tonight 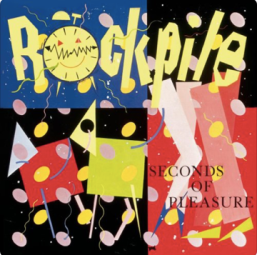 1979’s Labour of Lust would be Lowe’s breakout album, featuring his only American top 20 hit, “Cruel to be Kind.” But the album has real depth songwriting-wise with great rockers like “Switchboard Susan” and tender ballads like “You Make Me.” Personally, I was always drawn to the crashing intensity of “American Squirm” and the pop jauntiness of “Without Love.” Next up was Rockpile’s Seconds of Pleasure, where only six of the twelve tunes were penned by Lowe and that didn’t include the charting single, “Teacher Teacher.” Of the six, the sparkling jangle of “Now and Always” only slightly edges out “When I Write the Book” as the best Lowe tune on the album. By 1982 Lowe was back to being a solo artist but Nick the Knife failed to produce a charting single. Still, I love acoustic guitar-anchored “My Heart Hurts” and the wistful “Raining Raining.” 1983’s The Abominable Showman (despite its dad-joke worthy title) was a strong album, featuring a great organ-heavy Paul Carrack duet on “Wishing You Were Here.” But for me, “Raging Eyes” was the obvious single, while “Mess Around with Love” (Lowe’s reworking of his earlier Brinsley cut “We Can Mess Around”) was another highlight.

In 1984 Nick was an early adopter of the roots sound on his Nick Lowe and his Cowboy Outfit, a record that also contained a should-be hit single, “Half a Boy and Half a Man.” But I was more drawn to the poprock gems “Love Like a Glove” and “God’s Gift to Women.” 1985’s The Rose of England contained Lowe’s most naked attempt to get back on the charts with his own version “I Knew the Bride (When She Used to Rock and Roll),” a song previously popularized by his old pal Dave Edmunds on his 1977 album Get It. It proved to be a very minor hit that tended to overshadow just how strong the album was, particularly it’s folk-poppy title track and the inspired John Hiatt cover, “She Don’t Love Nobody.” Nick’s next two albums witnessed him struggling to find his place in the then contemporary music scene. Both 1988’s Pinker and Prouder than Previous and 1990’s Party of One had plenty to please Lowe fans but no hit singles that might expand that base of support. Still, for hooks, I’d single out “Wishing Well” from the former and “Who was That Man?” and “All Men Are Liars” from the latter. 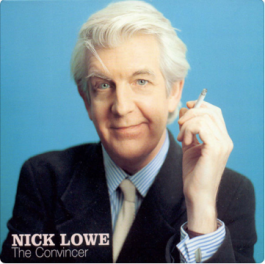 In 1992 Lowe took another stab at joining a band, this time Little Village with John Hiatt, Ry Cooder and Jim Keltner. With such an all-star line-up, excitement about the project was palpable, but the response to their sole album was lukewarm. Personally, I think Lowe’s turn on vocals is one of the record’s highlights on “Take Another Look.” Then Lowe shifted gears again, taking his albums into darker, more serious moods, with the release of The Impossible Bird (1994), Dig My Mood (1998), and The Convincer (2001). Here Lowe deliberately sought to reinvent himself as more introspective, mature artist, and the overwhelming critical response has been that he succeeded. Still, every album has a few more poppy numbers, like the uptempo “I Live on a Battlefield” or the more subtle earwormy “Indian Queens.” At My Age (2007) and That Old Magic (2011) lightened the mood somewhat, with the latter producing a particularly impressive range of material with songs like “Sensitive Man” and “Somebody Cares for Me.”

While clearly slowing down on releases, Lowe continues to record, most recently releasing EPs with backing from Los Straighjackets on Tokyo Bay (2018) and Love Starvation (2019), both representing a return to Lowe’s more rollicking rock and roll sound. But check out “Blue on Blue” to see how he still has a few surprises.

Nick Lowe truly is a legend of poprock and one of my favourite artists. He is the bar that I judge what great poprock sounds like. I can still go back and listen to any of his albums, enjoying them as if for the first time. Check out Nick’s website and Facebook page to keep up with his continuing exploits. You can also read all about Nick in Will Birch’s great new biography, Cruel to Be Kind: The Life and Music of Nick Lowe. Click on his name to find out more.