Beat Crusaders, ortoPilot, Salim Nourallah, Sixpence None the Richer, The Boo Radleys, The Columbia Kingsmen, The La's, The Wombats, There She Goes

Was there ever a band with a more tragic story of fabulous talent meets destructive perfectionism and bad luck? If I were holding a contest, The La’s would certainly be in the running for the top prize. Main songwriter and singer Lee Mavers was apparently legendary in his inability to live with any of the recorded versions of his songs. He insisted on rerecording them with new producers again and again until his record company finally gave up and released his band’s self-titled debut album without his approval. Amongst  fans, The La’s is an album that proves the band was more than a one-hit wonder. But for everyone else, if they’ve ever heard the group, it’s probably via their most played hit, “There She Goes.”

And what a song it is! From the hooky guitar lead line that lures you in, to the rhythmic acoustic guitar that anchors the song, to the hair raising vocal harmonies, the song really is poprock perfection. Personally, I prefer the original 1988 release of the song, produced by Bob Andrews, a slightly less sibilant version than the one worked over by Steve Lillywhite for inclusion on the band’s debut album in 1990. But they’re both great. Here’s the original and a Lillywhite produced acoustic version.

Commentators as disparate as New Music Express, Rolling Stone, Death Cab For Cutie’s Ben Gibbard and Oasis all think the song is pretty much perfect. So it’s not surprising it’s attracted some cover versions (though not as many as I would have expected). The earliest I can find is from The Boo Radleys, featured in the Mike Myers 1993 film, So I Married an Axe Murderer (the soundtrack strangely also featured the La’s original). Despite a rather bizarre orchestral take on the opening hook, the Boo’s deliver an great poprock version, with slightly more rocked up guitar lead lines and instrumental breaks. Columbia University’s acapella singing group The Kingsmen (definitely not the “Louie Louie” group) show you can’t keep a good song down, even when guitars seem pretty essential to the tune. Their version sans instruments from 1995 is strangely alluring. The last of the nineties versions is from Christian rock band, Sixpence None the Richer, who offer up a lush, aching take on the song that is still pretty close to the original.

Things get more creative in the new millennium. First up, Japanese indie band Beat Crusaders offer up a brilliant techno remake that holds on to the essential elements while breaking the mould. Then The Wombats indie things up with their live-sounding version from 2009, adding some great banjo and vocal spontaneity. YouTube cover sensation ortoPilot gets around to covering the song on Volume 13 of his Covers Album series, sounding much like the original in an acoustically stripped down state. Last up, low key poprocker Salim Nourallah offers a softer introspective interpretation of song from his 2017 album of covers, A Break in the Battle, with help from Chris Holt and Paul Averitt. 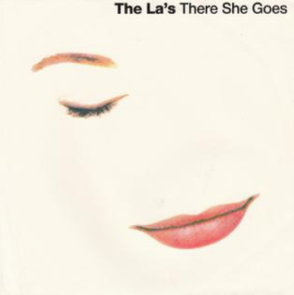 Great treatments of the song here but my prediction? We have yet to see the real flood of covers coming for this tune. “There She Goes” is such a perfect distillation of the basic elements of poprock songcraft in its combination of lyrical, melodic and instrumental hooks that it will prove irresistible to future bands. In fact, I think we have yet to see the definitive treatment (other than the original, of course). For instance, I would love to see an adrenaline-fueled jangle treatment from the guys who put together That Thing You Do or Fountains of Wayne or Marshall Crenshaw, to name just a few. Final treat: watch this interview and performance (of “Timeless Melody”) with Mavers and John Powers on Canadian Much Music from 1991 – they really were a killer live act!

Lee Mavers’ retirement plan is pretty much riding on this song so don’t be skint. Check out the various La’s releases and click on the artist names above to explore their broader music catalogues.