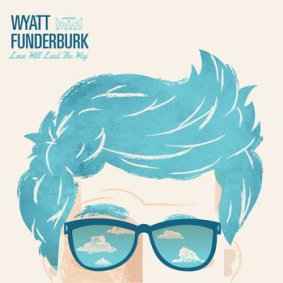 I know what you’re thinking. Just what kind of name is Funderburk anyway? I was thinking that too as I absent-mindedly hit play on “Love Will Lead the Way.” And then I didn’t care because this single’s magnetic quality completely drew me in. The chimey guitar made the sparse hair on my forearms stand on end. Then the drum kicked in, setting the scene for a John Waite “Missing You” kind of hypnotic tempo. What followed was a marvelous piece of hit-single-worthy songcraft. “Love Will Lead the Way” has a beautifully restrained musical arrangement, vocals and performance that delivers its melodic punch all the more effectively for it. The later Fountains of Wayne effervescent harmonies were just the icing on the cake. As the song faded out I knew I’d be hitting replay more than a few times.

Before I knew it, I was downloading Funderburk’s entire catalogue from Bandcamp, including two albums from his band Second Saturday, a teenage release and an album of demos. As I skimmed these many recordings I was thinking, who is this fricking poprock genius? All this stuff is great, and that is not even getting to the album that includes our featured single, 2013’s Novel and Profane, which is also, by the way, freakin’ fantastic. The record is loaded up with tunes that sound like a Beach Boys beach party, if Fountains of Wayne and Bowling for Soup were put in charge of updating the sound. I knew I should spend some time with all these recordings and pull together a career retrospective – Funderburk deserves it – but I’m not feeling particularly patient right now. People need to know how great this single is pronto!

Now, if I may be so bold Wyatt, I’m going to mess with the past and reconfigure the release of this single. The current b-side – “The Reason” – is great but I’m convinced that another song from Novel and Profane would turn this baby into a killer double A-sided single. So I’m going to add “Never Seen the Sun” as the new b-side. I love the subtleness of the hooks in this song, particularly in the change up of the lyric measure on the ‘but you’ve never seen the sun’ line. Overall, the tempo and general feel is very Beatles country, with splashes of FOW on the vocals here and there. Brilliant!

It’s hard to find that much out about Funderburk. It appears he is producer that has worked with artists like Kurt Baker, the Wellingtons, and Bowling for Soup, among many others (Funderburk features recordings by many of the artists he’s worked with on his Soundcloud page). But a one-stop career recap is hard to come by. Nevermind. His recording are readily available on Bandcamp, iTunes, and elsewhere. Don’t deny yourself.

5 thoughts on “Should be a hit single: Wyatt Funderburk “Love Will Lead the Way””