Bob of the Pops, He Doesn't Love You Like I Love You, Robyn Gibson, The Junipers 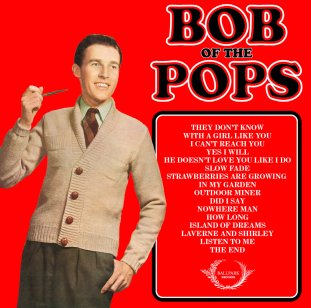 Bob of the Pops is a labour of love from Robyn Gibson, leader singer of The Junipers and, in this case, a one-man band performing all parts on this particular project. Sneaking in recording sessions after his main band was done work for the day, Gibson took five years putting together this amazing collection of covers.  The range is spectacular, from rare to well known choices covering 1960s up to the 1990s.  Gibson’s formula is simple: take catchy tunes and apply his unerring talent for recreating a jangly 1960s British poprock sound.  The fit is obvious with his covers of sixties bands like the Hollies, the Springfields, the Who, the Beatles and the more obscure Honeybus, but it works just as well for later material from the Dentists, Kirsty MacColl, Teenage Fanclub, and the Laverne and Shirley TV theme.

Bob of the Pops is a strong collection but the standout track for me is Gibson’s reinvention of Nick Heyward’s “He Doesn’t Love You Like I Love You.”  The song is a nice cut from Heyward’s 1993 album From Monday to Sunday, penned and ably performed by the former Haircut 100 front man.  But Gibson brings out the song’s inner 1960s soul, tweaking the melody as if it had been a hit by the Searchers (the first time around).  Besides, who refers to ‘rag dolls’ outside of the 1960s?  Nobody.  This is now the definitive version (sorry Nick).

Bob of the Pops deserves wide exposure, it’s that much fun.  Tell your friends, give it to your relatives.  You can get the album on Bandcamp and visit Robyn on Facebook.

1 thought on “Spotlight Single: Robyn Gibson “He Doesn’t Love You Like I Do””