Darren Hanlon, I Will Love You All, Urban Folk, Where Did You Come From?

Ever since Billy Bragg came back to folk through punk rock, a succession of scratchy rock and rollers have downed their noisy musical tools for the more sombre, spare delights of an acoustic guitar and a well turned phrase.  What emerges is neither traditional folk nor folk 2.0 but something more synthetic: Darren Hanlon calls it urban folk, a great label (whatever it may mean).  I stumbled across Hanlon in the “Listeners Also Bought” section below an Ice Cream Hands album on iTunes, which tells you how much the categories have become mixed up, in a good way.

Since 2000 Hanlon has released a number of homemade sounding albums and EPs, chock full of earnest ballads and sometimes hilarious material.  “Punk’s Not Dead” from 2002’s Hello Stranger being a classic example of the latter.  But with the release of his 2010’s I Will Love You All Hanlon takes his songs and artistry to a new level.  So many great songs to choose from, the name-checking references for comparison seemingly endless.  The sweet “All These Things” with its charming video conjures up the acoustic side of Feist or the boyish enthusiasm of Jonathan Richman.  “Butterfly Bones” is wistful and whimsical, both lyrically and musically.  “Modern History” has more of a poprock feel, with a great hook. 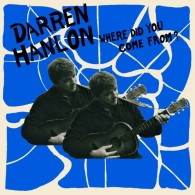 The confidence of his 2010 release remained in evidence for his 2015 album, Where Did You Come From?  Again, the songs and performances seem perfectly pitched: “Salvation Army” sounds like any number of classic 1960s folk duos, “Awkward Dancer” is built around a great hooky lead line, while “Halley Comet, 1985” evokes the romantic imagery of Don McLean.

Darren Hanlon is a slice of something authentic.  Explore what he has to offer on his website or Facebook page.