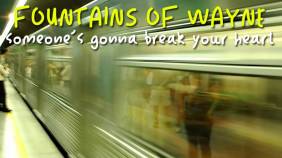 Fountains of Wayne were a late discovery for me. I was long past my own initial period of finding new music (roughly from 1978 to 1992), too busy with academic pursuits to hit the record bins. Luckily a friend (thanks Tony Lee!) turned me on to their debut album and it blew my mind – I was hooked. To me, FOW were what great poprock singles were made of. The debut album Fountains of Wayne had “Radiation Vibe,” Utopia Parkway had “Red Dragon Tattoo,” while Welcome Interstate Managers, their masterpiece, had the flawless and commercially successful “Stacey’s Mom” (which reached 21 on Billboard’s Hot 100). But on 2007’s Traffic and Weather FOW seemed to lose their way, failing to capitalize on their previous success. 2011’s Sky Full of Holes offered a serious course correction, full of great songs showcasing the band’s great range in songwriting and performance.

But the highlight was the album’s first single “Someone’s Gonna Break Your Heart,” a perfect distillation of all the great elements of a poprock hit. Pumping piano kicks off the song, giving way to the opening lyrics that eventually swell into a mix of background vocals. Nearly everything drops out to just piano as the vocals ask “Should we take this town, do we want to, tear this whole thing down …” while the band comes back in. And so on. Great poprock hits have a dreamy quality and FOW nail it with a song that should have climbed the charts.

4 thoughts on “Should be a hit single: Fountains of Wayne “Someone’s Gonna Break Your Heart””